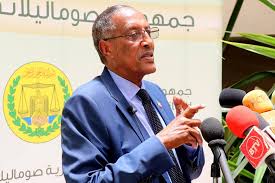 In a statement from the office of the Presidential spokesman, the Head of State has sent his heartfelt condolences to the family, relatives and friends of the late commander who passed away on the 16th of April 2020 in the US.

In the same breath the President also sent the condolences on his own behalf and that of his office to the traditional leaders, elders and the nation at large, hence noted that the deceased took part in the rebuilding of the nation and uniting the members of the public.

He said that the late Abdi Sultan was also a member of the traditional leaders.

He prayed to Allah to rest the soul of the departed leader in paradise hence strengthen faith and will-power to the family members mourning in this trying moment.