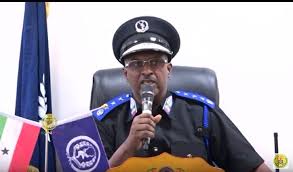 Somaliland Police have detained a man who has raped and killed a 15 year-old woman in Lugyaha district in Awdal province.

The incident has panicked locals in Lughaya district.

At the same time, the police boss has dismissed with immediate effect a corporal police officer who has been caught-red handed for slapping a young girl in Hargeisa.

A tape recorded during the police officer slapping the young girl has spread like a wildfire in social media.

The police boss posted a statement relieving the corporal police officer from all duties.

Mr. Mahad Abdi Osman has been dismissed after hours of harassing the young girl.

The official police statement added that the police are a close friend of the public, so we have fired him as he committed an act of harassment while in uniform.

The new police officer who has been in office for a short time has taken steps in the right direction as the public greeted them with enthusiasm.