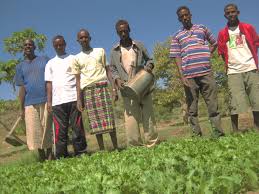 Farmers in Hargeisa are celebrating dramatically increased crop production after installing a newly introduced drip irrigation system on their farms.

Ali Ismail Abdullahi, a farmer in Arabsiyo village 35km west of the city, has been selling the onions, green bell peppers, hot peppers, cabbages and tomatoes that he grew using the drip irrigation throughout the year.

It cost Ali $1,200 for Ali to set up the system that has helped him, especially during the dry season to continue growing vegetables.

A generator pumps water from the well to a tank on his farm and then to irrigation pipes with small holes placed directly over the root zone of the plants.

“This system has helped me to manage the amount of water I use on my farm. I also save on diesel fuel costs for the generator and I have grown more produce than previously when despite using a lot more water |I got a very little harvest,” Ali said.

“My income has grown and I am hoping that the produce from my farm will increase in the forthcoming months,” he said.

The irrigation system has been introduced in several other villages including Galoley, Agamsaha, El-gininsed, and Gebiley by Somaliland Agriculture Technology, a support group promoting modern farming practices.

The group’s head, Ahmed Abdi Gaas, said they had trained 2,000 farmers from different areas over nine months training on using the drip irrigation, which has already shown great results.

“The technique is saving water for the farmers as this kind of irrigation allows water to drip slowly to the roots of plants from above the soil surface,” he said.

Around 10,000 farms in Sabab, Sool, Awdal, Sahil, Waqoyi-Galbed and Togdher regions of Somaliland are using the new drig irrigation technique.

Omar Alin has been farming in Gebiley for 40 years, and this is the first time that he has been able to grow food outside of the rainy seasons. After receiving the training, Omar invested in a drip irrigation system on his farm, where he grows lettuce, tomatoes, and other vegetables.

“I am happy now! The water used to be inadequate and we were forced to minimize our usage when the water wells dried in the drought. But this system has helped us to use water responsibly,” he explained.