The ministry of Posts yesterday reintroduced its first Postal Services after hiatus of more than three decades.

Mr. Abdiweli Sufi Jibril had the cut the ribbon of the first of its kind postal service office at the ministry of posts premises .

The postal services fell into disuse during the 1988 war in Somalia.

The resumption of SL’s first postal service operation is spearheaded by the current administration headed up by incumbent president Musa Bihi Abdi.

The office is fully furnished and has postal home delivery vehicles.

The minister speaking during the launching ceremony had reiterated that staffers were available at the posts offices who are responsible of delivering more than 100 mails and parcels across the provinces in Somaliland. 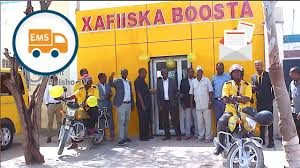