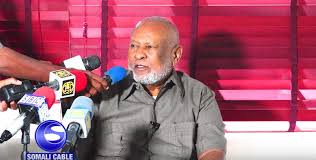 The Speaker of Somaliland House of Elder, Suleiman Mohamud Aden, has defended the term extension for the bicameral parliament maintaining that no election will be held before that.

In a defiant speech, the speaker has urged the opposition parties to accept the reality that elections won’t be held before this scheduled time.

He has accused them of exaggerating the dispute over the election.

The speaker was opening the 71st session of the house of elders today.

last year the House of Elders had extended the term of the House of Reps by two years postponing the local and parliamentary elections in the process.

The delay was not welcomed by the opposition parties and proved not popular with the public.

Somaliland is caught in the midst of an electoral impasse that has threatened the legitimacy of most of its branches except for the president and all other elected officials have grossly overstayed their terms in office. The parliament by 15 years and the local governments by three years.