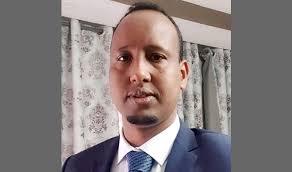 Hargeisa – A court in Somaliland as sentenced Abdimanan Yusuf, the CEO of Astaan TV to 5 years imprisonment and a fine of 2 billion Somaliland shillings on Wednesday.

In addition to the jail and fine, the Marodi Jeh regional court ordered that Astaan TV cease its operations in Somaliland.

Abdimanan was arrested on July 17 by authorities in Hargeisa and had reportedly unable to meet with lawyers and family.

The court proceedings against Yusuf have been shadowy, and details surrounding his arrest have been scant.

Omar Faruk, the Secretary-General of the National Union of Somali Journalists (NUSOJ), believes that Yusuf was tried and sentenced by a kangaroo court.

“This is a deliberately politicised case that was designed from the beginning to victimise Abdimanan Yusuf over a fabricated accusation to reach to ultimate the goal of silencing Astaan TV” said Osman, “Abdimanan Yusuf is innocent and today’s ruling is a travesty of justice”.