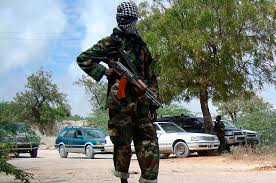 The Somali militant group, Al-Shabaab, has reportedly executed an 82-year-old man in Jowhar, the capital of HirShabelle state.

Ali Abdullahi Hassan was sentenced to death in an Al-Shabaab district court in Fidow after he went there to testify against one of two clans over land.

The family he was testifying against in the case told the judge that Ali was a government official of Jowhar district and could not therefore be a witness in the case.

Al-Shabaab then arrested Ali for further investigation, and later sentenced him to death.

Ali was a chief of Bula Sheikh district in Jowhar town.

Al-Shabaab had previously executed many alleged government officials and spies in south and central Somalia.