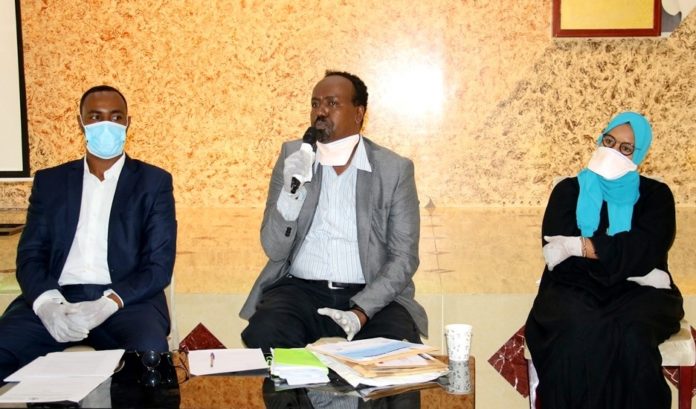 The Roads Development Agency (RDA) has today announced the overall results attained by the technical evaluation submitted by the six shortlisted firms competing for the tender to undertake a feasibility study for the road linking Lowyo -Cado,, Fardaha and the town of Borame.

Among those attending the meeting held at the Ministry of Transport headquarters were Roads Development Agency officials and representatives of the six international firms competing for the contract to undertake the feasibility study for the African Development Bank funded Lowyo Cado, Fardaha and Borame town.

The purpose of the meeting was to showcase the points attained by the six companies shortlisted.

Mr. Jimcale Dahir Ahmed , head of the Lawyocado, Fardaha and Borame road project speaking during the meeting said that We(RDA) shall evaluate the reports submitted by the Six companies and release them on a later date.

Director General of the Somaliland Road Development Agency Mr. Ahmed Yusuf Mohamed speaking during the meeting said, “we have come a long way to reach this point and out of the sixty firms who entered the bids only six have qualified and are now compete for the final stage of which one of them shall be chosen contract for the construction of the road linking the towns of Borama, Fardaha and Lawya-Caddo

The names of the six shortlisted companies and their country of origin.

The successful bidding company will be announced on a later date.

Finally, the pouches contain the documents submitted were opened  during the course and in the presence of the representatives of the six companies.