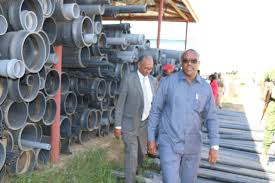 Borama can be arguably the best city in the country where water supply services has been the most aptly distributed and managed.

With piped tap water supplied to and received by almost every household, thanks to the local water management acumen of Shaba Water Company, the rapidly raising population has only but increased the demand.

Prof Dahir noted that the challenge posed by the raising population was real and quite monumental.

The engineer pointed out that formerly much of the water was sourced from the eastern parts of Borama, but they have explored and are drilling others in the western areas of the city, their latest endeavors being in the Sakawa vicinity.

Professor Dahir observed from his talks with the engineer heading Shaba water company that the extensive efforts of sourcing the all important livelihood sustaining commodity was quite costly and demanded aid, as it does, anywhere else on developing countries.

Usually apart from the local government and water ministries, international NGOs eked in to supplement and sustain such efforts by Shaba Water Company, which is at the epitome of its expertise as concerns water management.