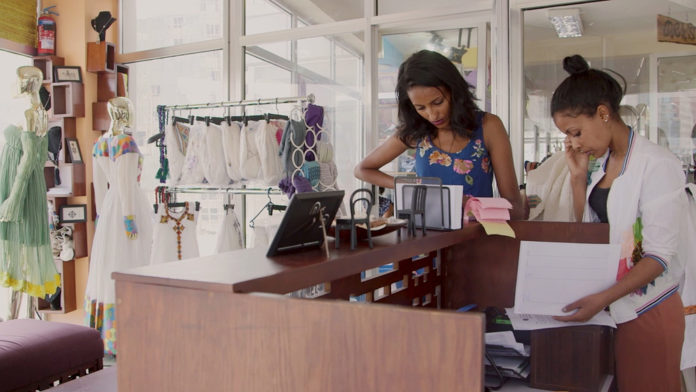 Every day is a busy one for Bethlehem Tefsfatsion and her five sisters as they have striven to grow their clothing business in Addis Ababa since 2015. Bethlehem joined her siblings in Ethiopia early that year, where they had sought asylum after fleeing from Eritrea.

“Life was not good back home,” she says. “We have better opportunity here in Ethiopia.”

Beginning their business was not tough for them because they had an eclectic mix of skill sets. “I do the designing and drawing, one of our sisters is a professional accountant so she manages the accounts. Another one loves modeling and has a great body so she is our sole model for the clothes,” she explains as she shows me a full photo album of their designs, all poses done by their sister.

They named their business “Fasika Tibeb” – Fasika is the name of their youngest sister.

When they started, they advertised on social media platforms. Once they hit the 15,000 mark for followers, they decided it was time to open a physical shop in 2017, to gain more trust from customers. 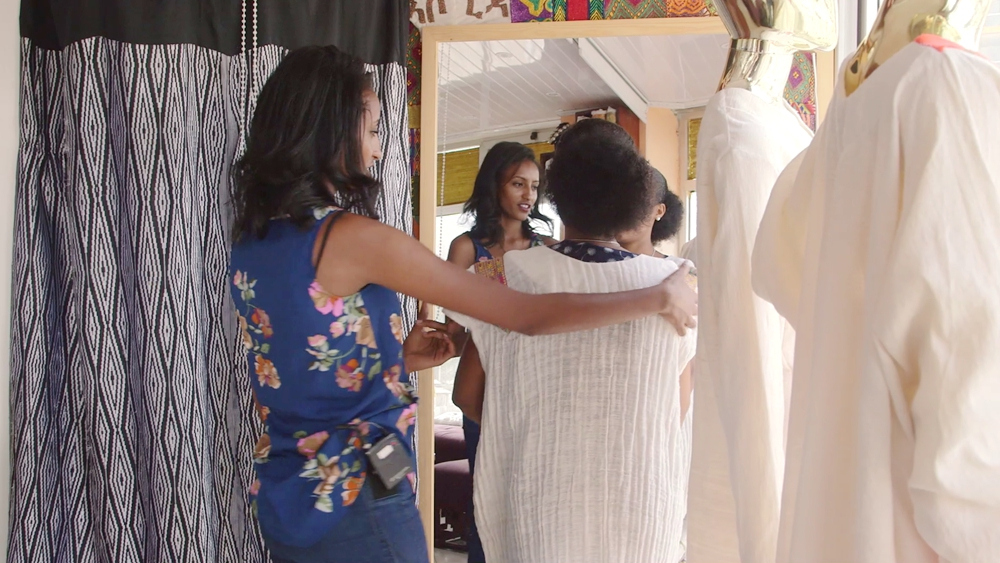 Bethlehem Tefsfatsion attends to a customer at the shop she owns with her sisters in Addis Ababa. /CGTN Photo

However, refugees were not allowed to have work permits or own businesses, so they decided to operate their company under a license in Ethiopia.

“We tried to find some people and friends who could do the licensing and obtain legal credentials, so that we could work under their name. That is how we do it now, that was the only choice, so we took the chance,” explains Bethlehem.

They have since sold 2,000 traditional dresses. The cost of a dress varies between 56 U.S. dollars and 370 U.S. dollars. The more handwoven designs on a dress, the higher its price.

The sisters’ dilemma of business ownership may soon be overcome now that Ethiopia has decided to pass a law that will integrate refugees and asylum seekers more.

Passed in January 2019, the new law will allow them gain access to key rights like work permits, primary education and drivers’ licenses.

Ethiopia’s move came after the UN General Assembly agreed to the Global Compact on Refugees in 2018. 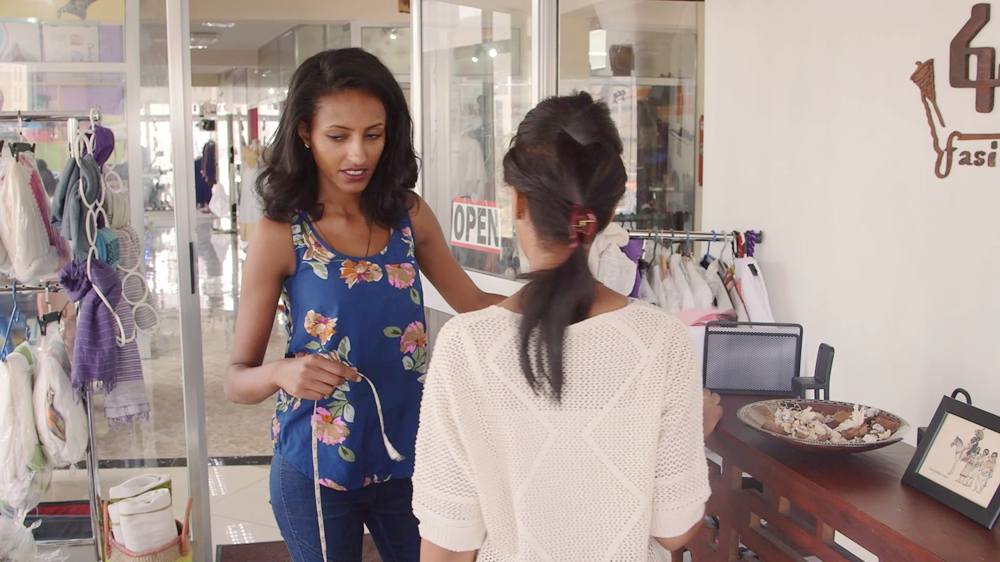 Bethlehem Tefsfatsion attends to a customer at their shop in Addis Ababa. /CGTN Photo

“Refugees can own work permits and get hired by fulfilling the requirements of vacancies, in most cases private sector or companies,” explains HaileSellasie Gebremariam, head of Legal Services at the Administration for Refugee and Returnee Affairs in Ethiopia. “If refugees fulfill that, within the limits of the rights given for foreigners who legally reside in Ethiopia, they will have the most favorable treatment.”

The law dictates that sectors that refugees and asylum seekers can engage in individually or in a group include agriculture, industry, small and micro enterprises, handicrafts and commerce.

Those with academic credentials will also be allowed to practice their profession in any sector. However, they will not be allowed to participate in national defense, security and foreign affairs sectors and political establishments.

“By allowing refugees the opportunity to be better integrated into society, Ethiopia is not only upholding its international refugee law obligations, but is serving as a model for other refugee hosting nations around the world,” Filippo Grandi, the UN High Commissioner for Refugees, said in a statement. 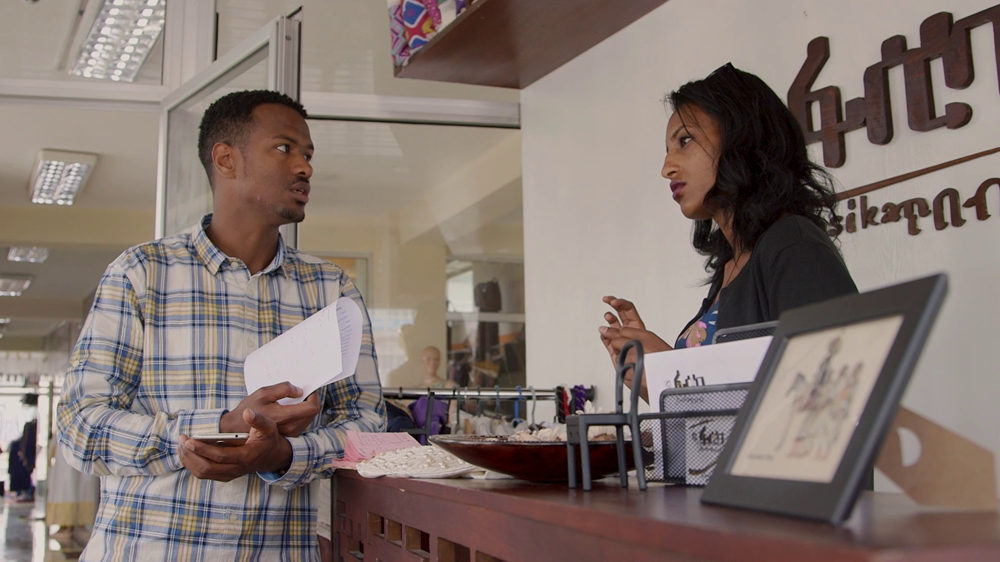 Bethlehem Tefsfatsion speaks to a client in a shop she owns with her five sisters in Addis Ababa. /CGTN Photo

Ethiopia hosts over 900,000 refugees from neighboring Somalia, South Sudan, Sudan and Eritrea, and some from Yemen and Syria.

A section of the local population in Ethiopia has expressed skepticism that allowing close to one million refugees into the job market will reduce the already limited job opportunities for them.

In the Gambella region in southwestern Ethiopia, over 430,000 South Sudan refugees are hosted by a community, which has just over 300,000 people.

The Ethiopia refugee agency admits that more awareness must be raised regarding the benefits of the new law, especially to the host community.

“It will be positive outcome for both refugees and host communities,” explains Haileselassie, the agency’s head of legal services. “We are conducting sensitization programs starting from government organizations to all partners and to the grassroots level, so that it will not be that much a challenge.”

As the government worries about effective implementation of the new law, Bethlehem and her sisters are preparing themselves for full ownership rights of their clothing business.