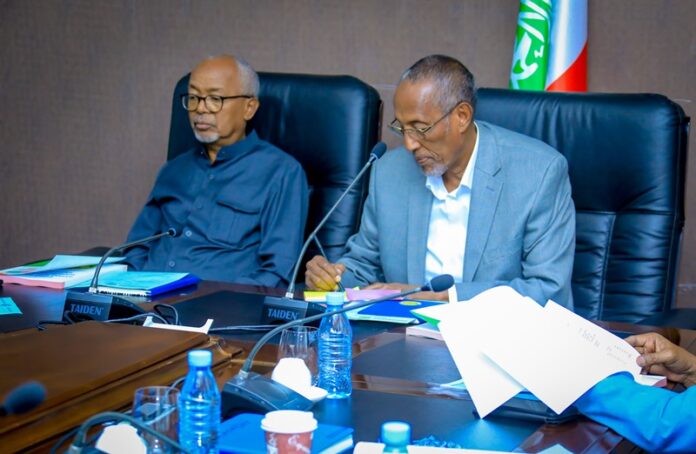 The 101st session of the council of cabinet ministers chaired by the President H.E. Musa Bihi Abdi flanked by his deputy H.E. Abdirahman Abdillahi Ismail (Saili’i) held on Thursday 27th October 2022 unanimously approved the 2023 annual budget tabled before them.

A press release from the presidency gave an outline of the budget focus.

This year’s budget is 4% (four percent) more than the previous one.

The 2023 Annual Budget Estimates are as follows:-

It increased or exceeded the previous 4% this year, while the federal government budget increased 5% compared to previous budgets.

The 2023 budget forecast will focus on the following items:

The Minister of Finance Development Hon. Dr. Sa’ad Ali Shire who presented the budget estimates to the council noted the due diligence exerted in fulfilling their duties as per National Constitution Article 55, Paragraph 1 and the Financial Management Act, Rule No. 75/2016 Section 5.

He said that they prepared a budget that focuses on the national needs of the coming year and urged for the proper scrutiny of the estimates.

After lengthy deliberations, the President and members of the cabinet praised the efforts of the ministry of finance and their efforts pointing out that the treasury had put much in the work.

They thereafter put to vote for the endorsement and approval of the budget estimates hence all the 32 sitting ministers in the session unanimously gave their ayes, with no single rejection.

Finally, the Head of State reiterated the imperativeness of seeing to it that the upcoming elections are prioritized and are held without incidences or hiccups.

He urged the people of Somaliland to prepare for the elections, and everyone that everyone should be able to vote freely in a harmoniously conducive atmosphere of brethrenship.