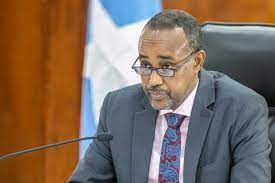 The PM and the President had a fallout after the PM alleged Farmajo of masterminded an attempted coup to prevent the conference from taking place.

Regional Presidents including Puntland, Hirshabelle, Southwest, Jubaland, Galmudug and the governor of Banadir region are participating the meeting and is expected to address irregularities raised over transparency of the ongoing parliamentary polls.

Farmajo called parallel consultative meeting last week, in which he said a new premier would be chosen, has not yet taken place.

Int’l partners have thrown their support behind the National Consultative meeting.

Issues the leaders are expected to raise at the meeting are cooperation on the security of elections, revising electoral procedures to stop vote-rigging and manipulation activities and issuing a fixed timeline to prevent further delays in the elections.