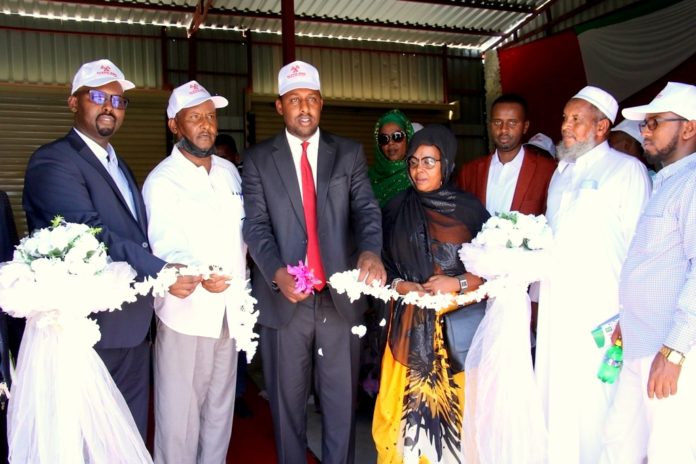 The Director-General of the Ministry of Transport and Road Development, along with other officials from the Ministry and Sahil region, opened the vehicle inspection and safety center in the city, near the International Port of Berbera.

The vehicle inspection and safety center will from now on check all vehicles imported into the country and those already plying the roads based on the government’s policy on road safety in the country, the new center was set up by Alpha BBG, a company that won the contract to provide the service in Sahil region.

The inauguration ceremony was held at the BBG headquarters and was attended by the Director General of the Ministry of Transport and Road Development, the Director of the Ministry’s Transport Department, members of the Sahil Regional Administration, Berbera District, representatives from car companies, and board official’s national human rights and other dignitaries.

Hon.  Abdirashid Mohamed Haji Yusuf MP from Alpha BBG, who spoke at the ceremony, spoke about the company’s history and the services it will provide.

He added that Somaliland Ministry of Transport and Road Development previously submitted a tender with the National Tender board for Vehicle and Safety Inspection contract and that Alpha Group were the out of the eleven privately owned firms submitting the bids for the contract, in Sahil region.

The new Vehicle and Safety Inspection center will ensure that the safety of our Somaliland society depends on three things. “These three things are training a professional driver, getting a good road, and getting good transportation,” he said.

Sahil Deputy Governor Mohamud Ahmed Sand here, Rhoda Ahmedyasin of the National Human Rights Commission, Sahil Region Politician Sheikh Saleban, Berbera District Deputy Mayor and members of the transport companies who addressed the event, said This center is very important to ensure the safety of the vehicles used in the country and the constant loss of life and property caused by accidents.

They commended the Ministry of Transport and Road Development for setting up the initiative and the policy to guide the service, which will supervise investors awarded the contract to deliver the equipment and establish the facilities.

The Director General of the Ministry of Transport and Road Development, Omar Sayid Abdullahi Adan, concluded the event by elaborating on the purpose behind the establishment of vehicle inspection and safety centers and the ministry’s achievements.

He said a study of the causes of most traffic accidents has revealed that poor car quality and roadworthiness play a significant role in the deaths and economic devastation of Somaliland.

“Accidents in the country are very, very high and we have lost a lot of people, so working together to reduce the number of accidents in the country. This public car safety program instructs us to get into the vehicle insurance system. “It instructs us to use transportation in the same way as the rest of the world, but if we involve politics these things won’t work”, he said.

The director-general added that when a person purchases a used vehicle worth ten thousand dollars, you must check your car’s mechanical and performance systems. The cost of the check is less than forty dollars per vehicle

At the end of the ceremony, the first vehicles were inspected and their general condition was checked.