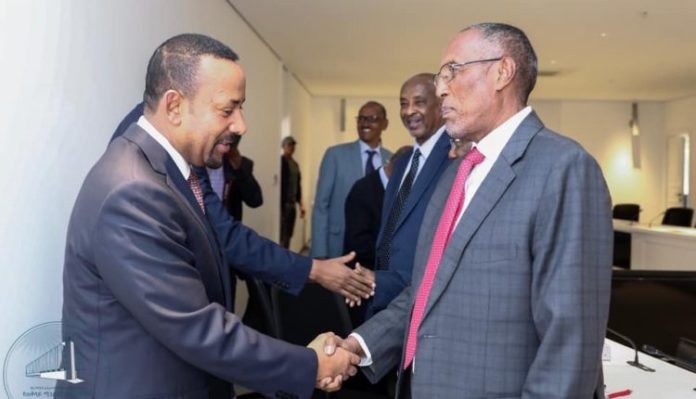 Somaliland government has expressed deep appreciation to the Federal Gov’t of Ethiopia for the cordial reception & welcome accorded to Somaliland delegation headed by the incumbent president, His Excellency Musa Bihi Abdi and his accompanied delegates.

The delegation from Somaliland led by the president started yesterday on an official working visit to Addis Ababa, the Ethiopian capital after its PM, Abiy Ahmed invited SL leader to pay an official visit to Ethiopia and held bilateral talks with him.

The government of SL said in a press statement from the presidential palace that it shares the same notion expressed by Ethiopia’s PM which is striving to make the region safe and secure.

The notion calls on respecting the sovereignty of each and every nation in the region and the press statement went on to say that SL is committed to cooperate on trade security and the progress of the region.

During the high level talks in Addis Ababa between Ethiopian PM and Somaliland leader, they reached a common understanding that Somaliland and Somalia will resolve their differences in an int’l venue but it is agreed upon that both sides were warned to refrain from any acts of destabilization that would leader to death and destruction in the region.

The press statement further stated that hostilities that left thousands of people perished occurred in the civil wars in Somalia and Somaliland.

Somaliland was established in respecting the will and the wish of its populace and is determined to respect the rights of its neighbors to live side by side in peace and security,.

The statement from Somaliland said that peaceful coexistence and being good neighbors will only come once Somalia authority refrains from its fabrications, animosity and the acrimony that they have for Somaliland populace.