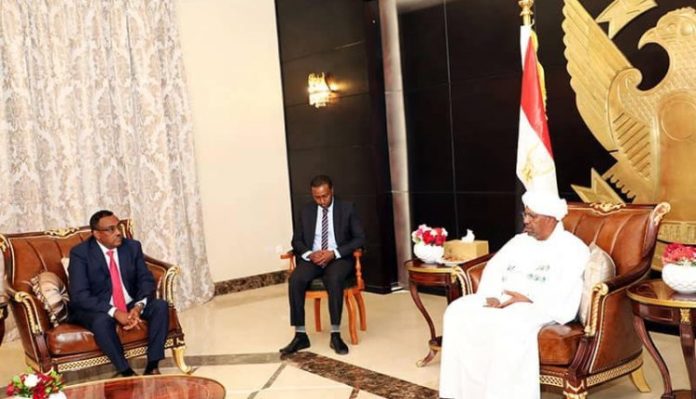 The two sides underscored the need to facilitate ways for economic integration between the two countries through trade, infrastructure, investment and other economic sectors, according to office of the Deputy Prime Minister.

The Sudanese government freed Ethiopians jailed in Sudan following the agreement reached between Prime Minister Dr Abiy Ahmed and President al-Bashir a few months ago. Demeke thanked the government of Sudan for releasing them.

And based on the request of the Deputy Prime Minister, President al-Bashir promised to free additional Ethiopians imprisoned in his country in accordance with the law.

The Deputy Prime Minister further said Ethiopia will collaborate with the Sudanese refugee commission and provide the necessary support to return 44,000 Sudanese refugees back to their home country.

In a related development, the 5th Joint Ethio-Sudan Higher Economic Committee meeting which was launched at the friendship hall in Khartoum early in the morning, wrapped up later today.

The two sides agreed to strengthen the economic cooperation between the two countries.

In his opening remark at the meeting, Demeke said the government of Ethiopia is committed to make every effort to strengthen relations between the two countries.

He further said Ethiopia has played a positive role in maintaining security and stability in the border, emphasizing his confidence in the Sudanese government’s ability to overcome the current economic crisis.

Demeke also commended the Sudanese government’s contribution for the peace in Southern Sudan and for the security and stability in border areas.

The Joint Ethio-Sudan Higher Committee, which was launched in 2014, aims to realize economic integration between the two countries.