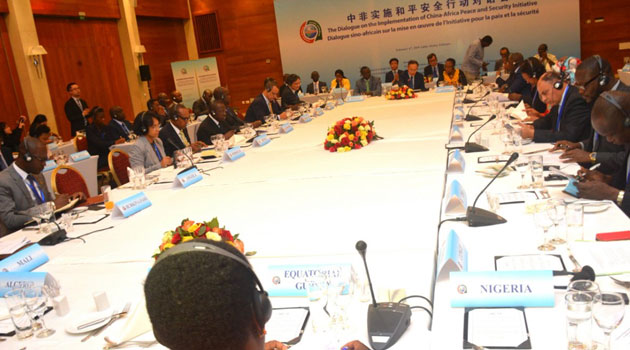 It was hosted by Forum on China Africa Co-operation (FOCAC) co-chaired by, China and Senegal, as well as by the African Union.

The dailogue was organized to facilitate implementation of the outcomes of the 2018 Beijing Summit in the field of peace and security. State Minister of Foreign Affairs, Mrs Hirut Zemene, led the Ethiopian delegation.

The dialogue was co-moderated by Mr Chen Xiaodong, Chairman of the Chinese Follow-Up Committee of FOCAC and Assistant Foreign Minister of the People’s Republic of China, and Ambassador Mame Baba Cisse, Secretary General of the Ministry of Foreign Affairs of Senegal. Ministers and senior representatives of more than 20 African countries exchanged views on the implementation of the outcomes of the Beijing Summit, the peace and security situation in Africa and capacity building in these areas.

In his opening remarks, Assistant Foreign Minister Chen Xiaodong emphasized that China was actively involved in mediating hotspot issues in Africa, and supported “African people in resolving African issues in the African way.” In this connection, he outlined new opportunities to step up cooperation on peace and security. These included: enhancing a strategic security communication and policy dialogue on peace and security; capacity building, focusing on Africa’s priorities and urgent needs; exploring new approaches to facilitate the resolution of hotspot issues; and formulating a plan for the utilization of the China-Africa Peace and Security Fund.

Mrs Hirut expressed appreciation for President Xi Jinping’s eight major initiatives announced during the Beijing FOCAC Summit in September 2018, including those relevant to peace and security. She described recent positive developments in the Horn of Africa, particularly the reconciliation between Ethiopia and Eritrea and the peace deal in South Sudan as well as the establishment of a stable government in Somalia. The State Minister appreciated the role of IGAD and the AU in the peace and security of the region and thanked China for its engagement in the resolution of the conflict in South Sudan. She requested that China continue its support in capacity building in various areas including peace-keeping missions, fighting terrorism and in cracking down on human trafficking. She welcomed the envisioned establishment of the China Africa Security Forum.

The dialogue was concluded with remarks from Assistant Foreign Minister Xiaodong. He emphasized that China had taken note of the views of Africans and would use them as input towards the implementation of the initiative.