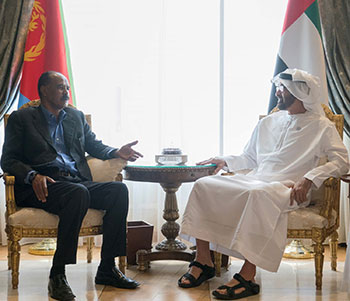 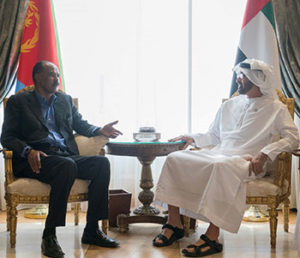 During a meeting conducted in Abu Dhabi Royal Palace “Al Shatie”, President Isaias and Sheik Mohammed discussed on investment, economic cooperation and regional issues of concern to the two countries.

President Isaias expressed appreciation for the contribution of Sheikh Mohammed bin Zayed Al Nahiyan in ensuring peace and stability in the region.

Sheik Mohammed on his part expressed appreciation for the Jeddah Peace Accord signed in Jeddah by President Isaias Afwerki and Prime Minister Abiy Ahmed on 16 September hosted by King Salman bin Abdulaziz.

Sheik Mohammed went on to say that the peace accord will have significant contribution in strengthening peace and stability of both countries and the region and expressed the full support of the UAE.

President Isaias Afwerki is on a 3-day working visit to Abu Dhabi.