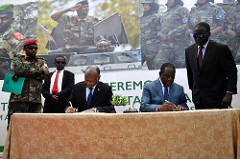 Mogadishu, 1 March 2019 – The African Union Mission in Somalia (AMISOM) yesterday handed over to the Federal Government of Somalia a military training academy it has occupied for more than a decade.

The Jaalle Siyaad Military Academy, which had been an operation base for the Burundi contingent, since September 2008, was handed over to Somalia’s Deputy Prime Minister, Mahdi Mohamed Guled, by the Special Representative of the Chairperson of the African Union Commission (SRCC) for Somalia, Ambassador Francisco Madeira, at a colourful ceremony held in the Somali capital.

“The handover is another major milestone in the implementation of the Somalia Transition Plan, and it follows last August’s handover of the Mogadishu National Stadium to the Federal Government of Somalia,” Ambassador Francisco Madeira stated.

The Academy holds a special place in the country’s history, having served as a key Forward Operation Base (FBO) for AU troops during the fierce battle against Al-Shabaab militants that led to the liberation of Mogadishu in 2011.

The handover, the SRCC noted, signifies the commitment of AMISOM and the Federal Government of Somalia (FGS) in fulfilling key requirements under the United Nations Security Council Resolution 2431, which authorized the withdrawal of AMISOM troops and gradual transfer of security responsibility to the Somali National Security Forces.

Ambassador Madeira recollected how the once prestigious military academy fell in the hands of Al-Shabaab, at the height of the civil war.

“It was from this same base that AMISOM troops with the support of Somali forces gallantly liberated another national institution, Gashandiigah, which in turn led to the securing of one of Mogadishu’s iconic market, Bakara market, consequently contributing to Al-Shabaab’s defeat and withdrawal from Mogadishu,” Ambassador Madeira said.

The handover was the culmination of three months of preparation, which saw the Burundi continent move its main operating base to Jowhar, the administrative capital of Somalia’s youngest state, HirShabelle.

The Deputy Prime Minister described the handover of the academy as proof that the country was on the right path to achieving long-lasting peace and security after decades of war.

“The handover of Jaalle Siyaad is a testimony to the commitment by the government and its partners to the implementation of the National Security Plan, which is one of the top priorities on the list of government programmes,” he observed.

Paying tribute to the sacrifices made by AMISOM soldiers in stabilizing the country, Mr. Guled urged residents to work closely with the government in its efforts to secure the country and promote the rule of law.

Mr. Marco Carmignani, the Director of Rule of Law and Security Institutions Group (ROLSIG) of the United Nations Assistance Mission in Somalia (UNSOM) thanked AMISOM for its contributions and pledged the United Nation’s continued support to the stabilization process.

“Allow me to reiterate the commitment of UNSOM and UNSOS [United Nations Support Office in Somalia] to support the FGS [Federal Government of Somalia] and AMISOM during the next phases of the transition process,” Mr. Carmignani, who spoke on behalf of the UN Mission in Somalia.

Minister Haga, who also spoke at the ceremony, thanked the Burundi contingent for securing and maintaining the facility, which he noted used to be one of the continent’s top military academies before the civil war.

Speaking on behalf of the Burundi contingent, Brig. Niyungeko urged the federal government to use the academy and the Somali National University, which was handed over in July 2017, to train future civil and military officers.

A number of assets put up by AMISOM for use by Burundi forces, including accommodation facilities and generators were donated to the federal government.

The academy is the third facility to be handed over to the federal government, after the Somali National University in July 2017 and Mogadishu National Stadium in August 2018.