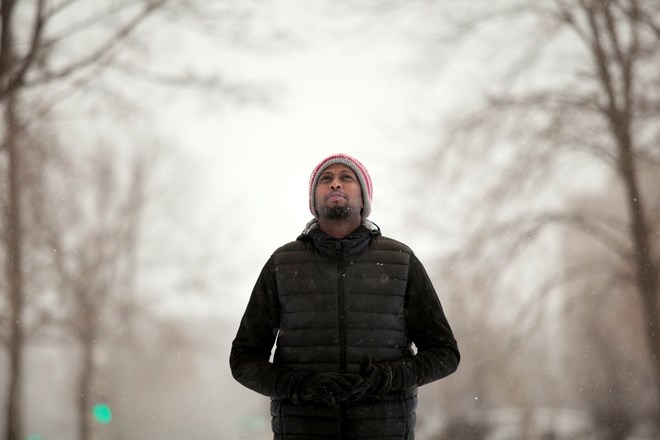 Yusuf Abdurahman, a war refugee, arrived in the United States in 1992 and found work in a turkey-packing factory in Minnesota. Three years later, his first child, Zacharia, was born in Minneapolis. CreditCreditThe Youth Film LLC

A Somali immigrant struggles to grasp his child’s imprisonment.

One of our best-read stories this month followed the journey of a white college dropout who was drawn to the alt-right after watching thousands of videos of far-right YouTube personalities.

Radicalization comes in many forms, and it can be thrust upon any parent whose child has been brainwashed by a cult or extreme ideology. That’s why the director Eunice Lau structured her new documentary, “Accept the Call,” as a father-son story.

We hosted Ms. Lau this week at our regular newsroom meeting on race, and she shared clips with us of her film, which tells the story of Zacharia Abdurahman, a Somali-American teenager in Minnesota who was arrested in an F.B.I. sting operation.

Ms. Lau explored the struggles of Zacharia through the eyes of his father, Yusuf, who arrived in Minnesota in 1992 while civil war was raging in his native Somalia.  Today, Mr. Abdurahman is trying to make sense of why his son tried to leave home to join ISIS.

The film, which premieres at the Human Rights Watch Film Festival in New York on Saturday, is about reactionary forces manipulating vulnerable people through ideology, and in that sense it is similar to the article we published about the white college dropout.

I asked Ms. Lau about her film.

How did you find this story, and why did you devote so much time to it?

When the news broke four years ago of six Somali teenagers arrested by the F.B.I. for attempting to leave the country to join ISIS, I had a suspicion that they were drawn to ISIS because of the impact the “war on terror” had on them. I wanted to investigate my theory. As a journalist and filmmaker, I feel it is my duty to delve deeper into understanding why this phenomenon is happening.

I didn’t expect to take three years to tell this story, but I realized that I am dealing with a very traumatized family and community, and it takes them time to process and make sense of that trauma. As a filmmaker, I have to respect that journey that Yusuf is taking to find his truth, and at the same time, I had to earn Zacharia’s trust before he felt he could open up to me.

What did you discover when you got to Minneapolis? What surprised you?
I didn’t expect Zacharia and his co-defendants to have it easy, given the prevailing anti-Muslim hysteria and bigotry. But I was shocked that Zacharia received 10 years in prison, even though he had pleaded guilty and was an exemplary college kid with no criminal record before his arrest.

His friends who chose to go to trial to prove their innocence received even harsher sentences of between 30 to 35 years in prison. It is clear that the criminal justice system continues to be inherently racist toward black Americans, and the creation of new provisions under the U.S.A. Patriot Act has kept some citizens in a permanent state of surveillance and over-criminalization.

How has this case affected Somali-Americans there?

In the weeks following the trial, parents were pulling their kids out of some after-school programs for fear that they would be secretly recorded and convicted. That’s how traumatized the community was after learning how law enforcement planted informants among them in order to collect sufficient evidence for conviction against the teenage boys.

The case also caused division within the community, as some maintained the convicted teenagers were entrapped into leaving the country, while others like Yusuf acknowledged that their children were radicalized and advocated for actions against extremism.

“The atmosphere was like a war zone,” Yusuf told me. That is ironic, given how this is a community made up of refugees who fled a civil war, and are now witnessing how their adopted country is waging war on their American-born children.

Why is the Abdurahman family’s story important to know?

Their story is a microcosm of how America’s “war on terror” has impacted American Muslims. Not only has it empowered the legal system to over-criminalize those found guilty of supporting terrorist organizations, but it also has fueled the clarion call of the extremists who are luring young minds to their ideology.

In his quest to find out how he son was radicalized, Yusuf said he faced hostility from fellow Somalis who wanted to shut down the uncomfortable questions he is asking. “I was accused of bringing shame into my community when I tried to raise awareness and spoke up against the bad interpretation of Islam,” he said.

It is important for Americans to know that the first casualties of this conflict are often Muslims who do not subscribe to extreme ideology, and in failing to discern between Muslims like Yusuf and the fundamentalists who carry out human rights abuses in the name of Islam, we have contributed to their vulnerability and marginalization.

What challenges did you face? Did your “outsider” status help you?

I relate to subjects as people and draw on our commonality, rather than differences to understand universal truths. Though I am not Somali, I also experienced confusion over my hyphenated identity, like Zacharia. The willingness to listen, and being mindful of the trust placed in me to tell the story is more important in my view.

Neither Yusuf nor Zacharia made me feel like an outsider, although being from the outside gave me some objectivity. It certainly helped, too, that I traveled to Somalia seven years ago and made a short documentary about the civil war there. Telling that story gave me the background I needed to understand Somalia’s history and the Somali-Americans, before embarking on such a complex story.

Where does the title “Accept the Call” come from?

The title is inspired by the repetition of the automated prompter each time Zacharia calls his father from prison. But it is also an allegory of what Zacharia believed in the past, when he wanted to join ISIS, that he was answering to a higher calling.