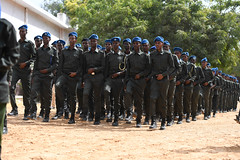 Mogadishu–300 soldiers have been trained to takeover the security responsibility of the areas liberated by the Somali national army.

Speaking at the graduation ceremony this week, Somali Police Boss, Abdi Hassan Mohamed, urged the officers to maintain discipline, be an exemplary and best practices among themselves.

The trainees were first trained in Djibouti for three months before undergoing a refresher program at the police academy in January 2020.

They are the first batch of 1750 Dervish forces to be trained to secure population centers in newly liberated areas of Lower Shabele.