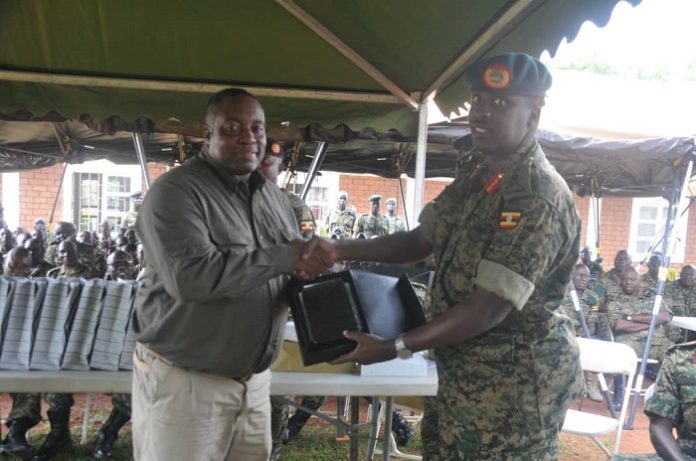 The United States’ military trainers under the African Contingency Operations Training Assistance (ACOTA) that have for twelve years trained the Uganda Peoples’ Defence Forces’ (UPDF) troops destined to Somalia has handed over the pre-mission training to UPDF.

Mr. Curtis Crum, the country director of ACOTA (recently renamed Global Peace Operation Initiative – GPOI), said the handover is in line with the program’s intent to build capacity of beneficiary countries and leave them to carry on by themselves once they have attained the necessary standards.

“Uganda has attained very high standards in peace support operations training with a team of instructors that have a wide range of experience in real life operations especially as they participated in the complex Somalia operations.”

He appreciated the cooperation that the UPDF and other training partners such as the French and British training teams accorded to them over the past decade that has enabled the current transition.

“It has been a great partnership. Through the years, there has been one constant in this partnership; a strong bond. This came as a result of good leadership that is dedicated to the Somalia cause.” Mr. Curtis emphasized.

He added that: “I have worked in several African countries and not any of them came close to the standard that the UPDF has portrayed. The Ugandan case in relation to the Somalia mission is a true example of a high level of sacrifice and professional dedication to a mission. I say this from the bottom of my heart on behalf of my current team and those that came before us.”

Gen Muhoozi said the US training team had been handy to the African cause in the fight against terrorism.

“ACOTA later renamed GPOI have been our real partners. Through thick and thin, they have seen us grow into our current strong peace keeping force that is able to stand on its own.” Gen Muhoozi said.

He explained that ACOTA has done a wide range of training and mentoring to the UPDF such as in the fields of general peace support operations, individual soldier kit training and vehicle maintenance.

“We have over 200 Explosive Ordinance Disposal (EOD) experts, thanks to ACOTA. This is big achievement. I thank them on behalf of the UPDF.” Gen Muhoozi said, adding that ACOTA’s contribution has greatly contributed to the UPDF successes in the region and in the fight against terrorism within the country.

The CLF whose office oversees the pre-mission training in Singo and UPDF’s operations in Somalia noted that ACOTA not only trained AMISOM forces but also UN Guard Unit operating in Somalia. He said that ACOTA’s move to develop trainers of trainers in Uganda was one of the most important things the region had received taking into consideration the key role UPDF plays in Somalia and the multiplier effect of this operations in the peace and security of the region and beyond.

“The challenges in Somalia are not just for Somalia, the region or Africa but for all of us on the globe. It’s a fight against terrorism that calls for concerted efforts like that inserted by our training partners.” Lt Gen Elwelu said.

ACOTA is a US Department of State funded program aimed at building capacity of African national militaries to enhance their capabilities in peace support operations.