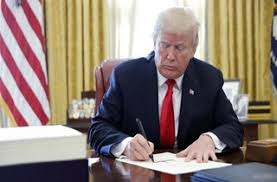 US President Trump has signed a year-end spending bill that authorizes the first phase of debt relief for Somalia.

Earlier in the week, Congress passed the spending package which included $35 million to begin paying the principle of $1.1 billion in US held Somalia debt.

This was confirmed in a tweet by Eric LeCompte, the Executive Director of the religious development group Jubilee USA. Jubilee USA worked on debt relief for Somalia for the last two years.

On Wednesday, the International Monetary Fund announced it is organizing the cancellation of its share of Somalia debt which stands at around $140 million.

The body said its seeing good progress from the United States Government and the IMF on Somalia debt relief.

Somalia owes about $4.6 billion in debt. The United States is the largest creditor holding $1.1 billion in Somalia debt.

The majority of the remainder of the debt is held by the International Monetary Fund, World Bank, France, and Italy.

Mogadishu has not made a service or amortization payment since the onset of the civil war two decades ago, making it impossible to access loans from the IMF.