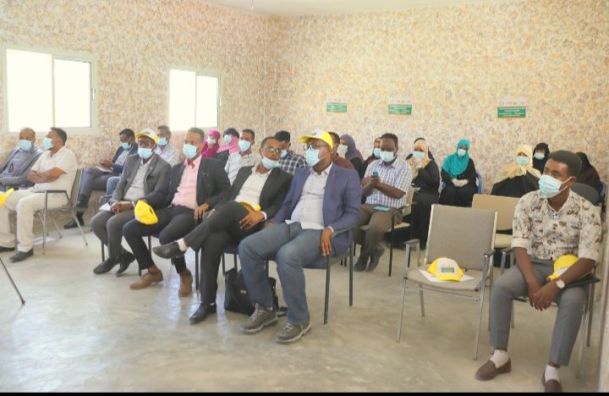 The two months project is to be implemented by the Somaliland Humanitarian and Social Care Organization- SOHASCO   courtesy of funding availed by UNFPA.

Launched in Hargeisa the project will see the targeted 250 beneficiaries acquire a variety of skills, including cooking, tailoring and make-up.

While the actual implementation shall be the onus of SOHASCO, a national NGO, the funding shall be channeled through YPEER Somaliland.

This was revealed during the project’s launching ceremony held at the implementing organization’s headquarters in Hargeisa and witnessed by various dignitaries among them officials representing UNFPA, YPEER Somaliland, the Somaliland Youth Consortium SONYO and Government as well a number of beneficiaries.

To jump-start the event with details of the project was the SOHASCO Executive Director Abdirizak Hussein Jama, who revealed that in targeting women and girls as beneficiaries the LNGO was guided by studies that show that women are most in need more so most of them having lost normal sources of income due to the Coronavirus pandemic.

“The workshop will be located in within the Hargeisa Central Business District thus avail ease of access to beneficiaries from all parts of the Capital” said the ED.

According to the YPEER Executive Director Mohamed Mahad Damaa, his organization shall manage the project funds on behalf of the donor, UNFPA, though “SOHASCO shall implement the program” while Stressing on the importance of the training which shall see recipients  acquire income generating capabilities thence enhance household economic power not to mention avenues of escaping from Gender based violence

The UNFPA youth director Abdiaziz Mohamed Farah who commended  SOHASCO for designing a very productive project said that a salient clause in the funding stipulates that awareness of beneficiaries in issues related to basic health especially post and natal care be raised.

In conclusion the UNFPA representative stated that the main objective pursued here is to enhance the livelihoods of both women and  youth while revealing that his organization has not yet released the project funds to YPEER while urging SOHASCO to continue arrangements.

The Director General ministry of Education and Science, Mr. Ahmed Abokor Mohamed, welcomed the launch of women’s education by SOHASCO, adding that the government’s plan is to improve vocational education as he urged those ultimately selected to ensure that they become community trainers themselves for it is life-changing.

Others addressing the function were Sonyo Youth Umbrella Chairman Abdiaziz Mohamed Fadfadhle, The deputy governor of Marodi-jeh region Khadar Barud Omar and Director General of the Ministry of Youth and Sports Mohamed Khawi who unanimously concurred that the project is very important since it will enhance knowledge more so human rights among women especially at these times when Gender based violence is in the increase.