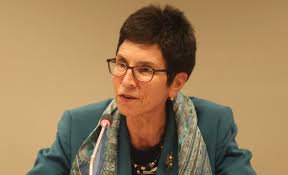 Djibouti, 4 October 2019–At the end of a three-day mission to Djibouti, Assistant Secretary-General for Humanitarian Affairs and Deputy Emergency Relief Coordinator Ursula Mueller today called on the international community to take immediate action to confront the climate crisis that is heavily affecting the country and the whole Horn of Africa and sustain the support to the humanitarian response. Throughout the region, recurrent droughts, water scarcity and other climate shocks have been drivers of high levels of malnutrition, disease outbreaks, food insecurity and displacement, triggering an increase in humanitarian needs.

“Climate change is real, and I could see it here. I saw the widespread drought and I met communities that can barely access safe water. They explained to me how this situation is impacting their lives. Djibouti has [made] virtually no contribution to the global climate emergency, but its population is suffering the consequences on a daily basis,” said Ms. Mueller.

Large areas of Djibouti are exposed to extreme weather conditions, affecting water availability and hygiene conditions, increasing the risk of disease outbreaks. Coupled with high levels of poverty and unemployment, this has left more than 280,000 people – one in three Djiboutians – in chronic levels of food insecurity. “Severe acute malnutrition rates are alarming and considered an emergency according to global standards. In Bondara village, women told me how they were doing whatever it takes to put food on the table for the family, but the frequent droughts are preventing them from doing so,” said Ms. Mueller.

On her way to the drought-affected Bondara village in the south of Djibouti, Ms. Mueller came across a group of young migrants from Ethiopia’s Oromia region making a dangerous journey towards the Arabian Peninsula in search of opportunities. “It was heart-breaking to hear a 20- year-old young woman mentioning that her dream is to find a job as a maid in Saudi Arabia, and she is risking her life in search of a better opportunity,” said the deputy humanitarian chief. Djibouti is a major route of migration with 400 to 600 migrants crossing daily, fleeing the impact of conflict, instability and harsh climate in neighbouring countries. Djibouti is also home to some 30,000 refugees and asylum-seekers and an estimated 100,000 migrants. The deputy humanitarian chief visited one of the refugee villages, in Ali Addeh a few kilometres from the border with Ethiopia and Somalia. During her meeting with community representatives and a women’s group to learn more about their particular needs, some refugees highlighted the need for long-term solutions. “The most basic needs are being met. However, there is a lack of livelihood opportunities that would allow the refugees to become self-reliant. A woman said that rather than receiving food, she would prefer to work to feed her family. These kinds of opportunities have to be created,” explained Ms. Mueller.

During her meeting with Djibouti’s Prime Minister, Abdoulkader Kamil Mohamed, and several ministers, Ms. Mueller commended government initiatives to support people who are most in need of assistance. “The effort the Government is making to support refugees here is remarkable. I could see in Ali Addeh how the joint work from government and humanitarian organizations is saving lives,” said the deputy humanitarian chief. “But the Government needs further support to help communities build up resilience, to be self-sufficient so that the recurring shocks do not lead to further suffering and more costly crises.”

At the end of the mission, the deputy humanitarian chief highlighted that urgent action is required to address the underlying causes of vulnerabilities and get on a path to sustainable development in Djibouti and the region.