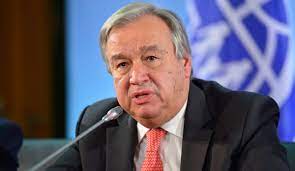 The Secretary-General of the United Nations Antonio Guterres spoke by phone on Monday to Somalia’s President Mohamed Abdullahi Farmajo amid fear of violence over alleged attempts to disband the government and pave the way for a further extension of the President’s mandate.

“The Secretary-General held a phone call today with H.E. Mohamed Abdullahi Mohamed ‘Farmajo’, President of the Federal Republic of Somalia. The Secretary-General expressed his solidarity with Somalia in the face of increased Al-Shabab attacks, and the drought the country is facing,” his office said in a statement.

“He also expressed his support for the African Union Mission in Somalia (ATMIS), and his hope that Somalia would be able to ensure its own security as soon as possible. Secretary-General and the President also discussed the electoral process in Somalia. The Secretary-General hoped there would be a swift conclusion for the electoral process and that any outstanding issues be addressed through dialogue.”

It comes days after opposition figures warned of attempts by the incumbent President Mohamed Abdullahi Farmajo to seize power in a coup, raising concerns that he could carry out his plans during Army Day celebrations on April 12.

Somali army said celebrations for the 62nd anniversary from its establishment will not be used to disguise a coup attempt and blamed individuals with personal political motives for spreading rumors aimed at tarnishing the reputation of the armed forces.