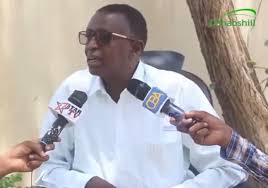 The Justice & Welfare party secretary in charge for home affairs has called for Djibouti’s envoy to Somaliland should be expelled from the country over his interference on country’s domestic politics.

Mr. Mohamud Ali Suleiman alias Ramaah has given 24 ultimatum to the Djibouti head of liaison office to Hargeisa, Mr. Kawaliye to leave Somaliland.

Mr. Ramaah has also clearly revealed Djibouti’s stance on Somaliland which failed to recognize its statehood since its inception in 1991.

The home affairs secretary of UCID has said that it is clear that Djibouti does not want Somaliland to be neighboring state that has an equal footing with Djibouti.

The secretary has expressed thanks over Somaliland populace and local media outlets in defending the criticism the party chair, Mr. Faisal has leveled against Djibouti president.

He condemned with the strongest possible terms over the state run media particular the television which sided with Djibouti envoy over Faisal’s remarks.

He said that it was unfortunate for a foreign diplomat to meddle Somaliland internal political affairs for the second time running.

Mr. Ramaah has stated that as diplomatic protocol, the envoy was supposed to summit his comments through writing.

The Secretary has further noted that Somaliland people living in Djibouti were the ones who paved the way for Djibouti to get its independence from the French colony.