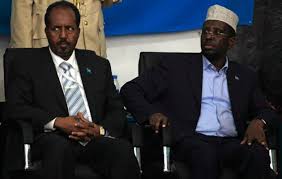 Two former Somalian presidents were blocked leaving for Beledweyne where they were planning to hand over humanitarian aid to the flood displaced families.

There is unconfirmed reports that the barring of the duo’s visit would coincide with the Somalian PM, Hasan Ali Khaire who is currently paying a visit to the flood affected areas.

The two former presidents, Hasan Mohamud and Shiekh Sharif were accompanied by parliamentary delegation from the newly established Forum For National Party (FNP) and remain stranded at Adden Adde airport in Mogadishu.

MP by the name of Mohamed Beene Beene confirmed the obstruction but added that they are about to establish the reasons for the blockade.

According to the team travelling with the former Head of States have confirmed that the duo are to deliver aid and 200, 000 dollars to Beledweyn families who remain displaced whereby 85 percent of the township remains submerged.

The Somalian PM delegation is odds with the opposition parties and does want to travel to the area.

The blockade is interpreted as a move to avoid the two sides to bump into Beledweyn.

The move to block the two former presidents is similar to when they were barred leaving for Kismayo in September in order to attend the inauguration of Ahmed Madobe as Jubaland state president. After the swearing ceremony was postponed, the duo attended Modobe’s inaugural in October.

Ex-Somalian President Hasan Shiekh Mohamud alleged the government of using the airspace as a weapon.