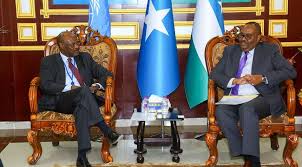 GAROWE–The Deputy Special Representative of the United Nations Secretary General for Somalia  Adam Abdelmoula had held a meeting with president of Puntland State of Somalia, Said Abdilahi Deni and some of his cabinet ministers discussing wide range of issues including humanitarian.

Abdelmoula tweeted, “My visit to Puntland yesterday confirmed what I had been discussing with other leaders in Somalia on humanitarian development and peace building efforts.”
The Deputy UN envoy had lauded Puntland state for making significant development in the fields of infrastructure, governance and security that became a good exemplary progress to the rest of Somalia.
Puntland leader, Deni on the other hand, praised the United Nations imperative work in Puntland recommending that the humanitarian operations be based on the needs of local community who had been hit by floods and droughts.
Deni reaffirmed that his administration is committed to implement the multi party system in Puntland whose foundations were laid down after he appointed last August an interim member nine member of electoral commission.
The Poll Agency has launched this month the registration of political parties as part of Deni’s led efforts to hold one person one vote to realize the much awaited dreams.
United Nations officials trip comes weeks after the Cyclone Pawan made a land fall and passed in parts of Puntland triggering floods that swept away livestock , destroying houses and cutting off the roads in parts of coastal areas.