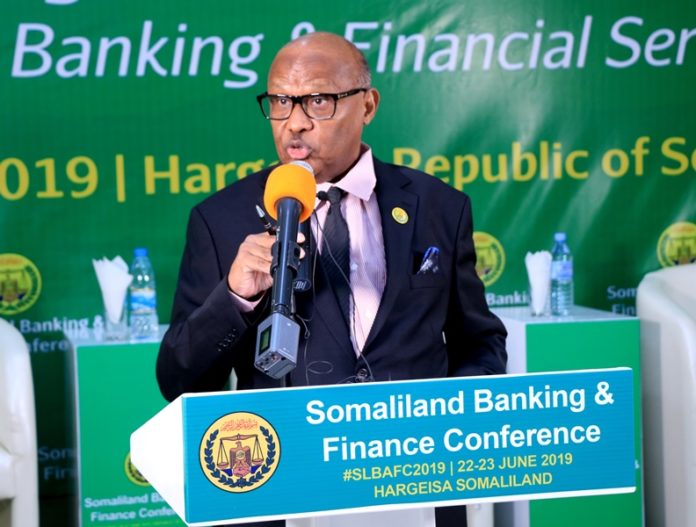 A workshop on drawing the Strategic Roadmap of the abovementioned ambiguous goal was concluded in Hargeisa on 23 June 2019. As a first step towards the long road of improvement, the conference also discussed upgrading and enhancement of the status of current Financial Services in the country.

The two days’workshop was organized by SomalilandMinistry of Finance and the County’s Central Bank. The purpose was to highlight and initiate the parameters of a long-termstrategy aiming at making Somaliland the FinancialServices HUB of Horn of Africa, a region largely failing in this front.

The Minister of Finance,Dr Saad A Shire, has outlined the current status of the financial servicesin the country in termsof the number and the strength of banking and non-banking service providersin themarketplace.  He also emphasized the role required of the country’s private banks in Job Creation, Economic Growth and uplifting the status of Small & Medium businesses.

The Director of Somaliland Central Bank, Ali I Jama, has on his part focused on the importance of vibrant banking and non-banking financial services, likeinsurance, to the economic wellbeing of the nation. He told the audience that the central bank intends to create the statuaryframework for an integrated,world-class banking system based on free marketingand fair competitionconcepts.He also stated that Somaliland has decided to adopt the vision to become the First Financial Services Hub of Horn of Africa.This conference was conducted as the first step towards drawing the relevant strategies, roadmaps, and deadlines.

Somaliland Vice President, Aburahman Zayli who delivered the closing note has emphasised that Somaliland is keen on implementing the Horn Banking HUB Concept, not with standing the challenges involved. All the speakers of the workshop recognized that in order to achieve this vision a lot has to bedone; But they also underlined that Somaliland has the dedication and the drive required to achieve this daunting goal.

Observers believe that, on the one hand, Somaliland is not yet an internationally recognized sovereign nation and could face additional challenges in achieving the stated goal. On the other hand, the International Community is for all practical purposesdealing with Somaliland as De Facto Nation. On top of that, it is also worth noting the people of the part of the world have long established reputation of being quite industrious and indeed pride themselves on playing leading role in connecting the interiors of Africa to the outside world, over the centuries.

Only time will tell whether Somalilanders will capitalize on their centuries old “Traders Culture” and achieve the task ahead. But a lot as to be done, as this challenging target requires jumping many hurdles. Among others, we have to start from where others ended – we don’t have to reinvent the wheel. Somaliland needs to adopt and practice International standards in Accounting,International Commercial Law,Basil II Framework that governs the banking and other financial services such as insurance and leasing companies.Finally, the SomalilandParliment has to pass the revised Investment Law and the Banking Act which willreportedly be based on Islamic Sharie Law.

In order make tothe idea of the Financial Services HUB of The Horn of Africa workable and realistic, we also need to incorporate Banking knowledge and culture in the country’s education system right for the Primary levels. The universities should also provide and deliver State of theArt programs in International Law, International Accounting Standards (IFRS) and the Accounting Standards for Islamic in Financial Institution (AAOFIF), etc.