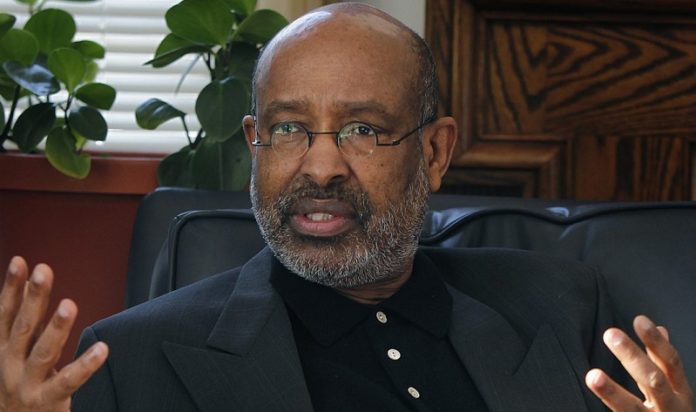 A Critique of Ahmed I. Samatar’s Op-Ed

Keen observers of domestic Somaliland politics would not fail to notice a certain talking-point that has recently been doing the rounds in the political circles of Hargeisa and taken up by a number of prominent politicians and intellectuals hailing from Somaliland’s minority communities, namely that of Saami Qaybsi. The phrase Saami Qaybsi is Somali euphemism for “power sharing” in the context of clan communities. It is a very vague concept often repeated without much clarification as to what it actually means. What is interesting is that despite Somaliland fully adopting a one-person-one-vote model as a foundation for its political discourse ever since the 2002 local election and the subsequent 2003 presidential election, the concept of power sharing based purely tribal-allocation is gaining support among minority communities in Somaliland. It is worth noting in this context that the winner of the 2003 presidential elections was former President Dahir Riyale Kahin who was a candidate belonging to one of these aforementioned minority communities of Somaliland. This article is a response to Prof. Ahmed I. Samatar’s op-ed published on Somaliland Chronicle on 5/12/2018.

Prof. Samatar is one of Somaliland’s foremost academic minds, and much of his opinion piece is worthy of consideration and implementation. Yet it is his discussion of power sharing, and demands for a proper Saami Qaybsi enshrined in law that is troubling. It advocates for going backwards and adopting a system similar to Somalia’s dreadful 4.5 formula for Somaliland instead of continuing on the path of clan-blind democracy of one-person-one-vote. By creating a tribal quota, Somaliland reneges on its democratic credentials and succumbs to what would essentially be political regression, or “snatching defeat from the jaws of victory” to borrow Samatar’s subheading. In that context, this article is a response to the issue of Saami Qaybsi as it relates to these two statements by Prof. Samatar:

“In fact, Bihi immediately returned to the old and defective formula of at once exaggerated appointments (32 ministers and deputies) and conspicuous communal imbalance that is exceedingly partial to the kin community in middle of the country (22 vs. 10 and only one full minister who is female).”

“… the long-­‐ standing disgruntlement by the kin communities in the western and eastern Somaliland over what they believe to be a severely lopsided and unacceptable distribution of parliamentary seats, one that allots 56 out of the total of 82 seats to the kin community in the geographical center of the country.”

From the quotes above, Samatar appears to be criticising a number of things, chief among them is what he describes as “lopsided and unacceptable distribution” of political appointments in favour of what he describes as the “kin community in the middle”. It is useful here to clarify the nomenclature, “kin community in the middle” here is a reference to the Isaaq clan of Somaliland, whilst references to communities in the peripheries relates to the Dir clan (to which Samatar belongs) in the West of Somaliland and the Harti clan in the East of the country. The use of these euphemisms has become prevalent among members of Dir and Harti communities recently and it has become the acceptable way of naming clans in polite company.

These demands on the face of them appear righteous and fair, but they are problematic because the basis on which Samatar (and others who campaign for it) have deemed the current arrangements unjust, or lopsided, are not entirely clear. Is it in relation to population sizes of different clan communities? Is it relative to voting power? Or a different metric altogether? In order to arrive at a solution, the basis for which they deem current arrangements inadequate must be voiced, so that other segments of society can take part in the discussion. Furthermore, proponents of Saami Qaybsi have not presented any solutions or visions for a system of power-sharing that would be more equitable to the one currently used in Somoaliland.

In summary, the issue with Saami Qaybsi advocacy in Somaliland is two-fold:

1- What exactly is the problem with the current power-sharing arrangements? What is the cause of the perceived injustice?

2- What alternative power-sharing arrangements do you propose?

There is no evidence presented to substantiate the claims of current allocations in Somaliland’s parliament, for instance are unjust, or how the ministerial appointments are lopsided in favour of one group (Isaaq) and to the detriment of others (Dir and Harti).

The most immediate way of coming upon a palatable power-sharing arrangements for the whole nation is to award political representation based on percentage share of the population. The problem with this is that a census has never been conducted in Somaliland since regaining independence, so having exact figures for the various kin communities is not possible for now. With that being said, the closest equivalent we have is a look at historical data, be it past election results, or colonial records, to try and find a starting point for this new, more fair, equitable sharing of political representation.

– Firstly, lets look at past elections. The most recent one has taken place in 2017, and saw the advent of biometric voting systems that proved very reliable in recording voter population. Samatar’s Dir community mainly inhabits the region of Awdal within Somaliland. Awdal (and Samatar’s Dir community) produced 81,436 votes out of a total of 565,617 votes in Somaliland. This constitutes 14.39% of the population of voters.

– Furthermore, Somaliland’s Parliamentary elections of 1960 resulted in 5 members of the Dir clan community (3 Gadaboursi and 2 Isa) elected to Somaliland’s first parliament out of 33 total elected representatives, this represents a percentage share of 15.15% of all representatives.

– And lastly, Borama district (modern day Awdal) returned 14,965 votes in the Somali Republic’s 1961 referendum of a total Somaliland vote of 104,033, which represents 14.38% of the total vote produced in Somaliland.

Seeing as a main point of contention of those advocating for Saami Qaybsi particularly from the western Somaliland kin community is the inadequate number of parliamentarians, which was a specific point highlighted by Samatar in his article, we can now compare that percentage figure of of 14-15% that they represent in Somaliland to their current allocation in Somaliland’s parliament.

There are currently 14 MPs representing this particular kin community of Awdal (13 Gadaboursi and 1 Ise) out of a total of 82 Somaliland representatives. This corresponds to a share of 17.07% of the total number of parliament representatives, which amounts to more political representation than the actual voting power of this kin community.

All the hard numbers and historical data above present a sizeable population ranging between 14-15% of the total population of Somaliland, yet receive political representation to the tune of 17.07% of the total number of Parliamentarians.

If anything, a more equitable sharing or clan-based Saami Qaybsi based on population figures would involve removing MPs from this community, not adding to it as Samatar demands. These demands of more representation without any justification of basis upon which representation is given exemplify a case of tyranny of a minority. In this context these political figures demanding additional representation over and above what their communities’ share of the vote would dictate does nothing but creating a sense of paranoia and pollution of political discourse of Somaliland with unfounded fears of domination. Let us not forget that it was only in Somaliland out of all Somali-speaking nations that a minority candidate was elected to office in a free and fair elections, this would not have ever happened had there been a overbearing push to politically sideline minority kin groups in Somaliland.

This Saami Qaybsi rhetoric is very dangerous and sets the stage for even more outrageous demands of ‘justice’ that are not justified by any measurable metric one uses. In reality these are demands of appeasement and political blackmail by politicians hailing from minority groups in Somaliland aimed against the majority kin group, which would no doubt create an opposing and equally domineering wave among the majority Isaaq kin group in response. This damages our civic cohesion as a nascent nation and creates an environment ripe for ‘tribal justice warriors’ keen on taking advantage of these conditions to capitalise on said fears for their own gain.

It is prudent before demanding justice, to explain why the current system is flawed and offer alternatives, calling for justice for the sake of calling for justice is an exercise in futility. It is damaging and sows the seeds of distrust and paranoia within our brotherly communities.

The alternative is clear. Going back to the 1990s to create a tribal power-sharing agreement flys in the face of everything the people of Somaliland achieved since declaring independence. Democratic vote should be the only arbiter of the issue of representation, its the most transparent and fair way to distribute political representation. It is the only sustainable political model we can use.