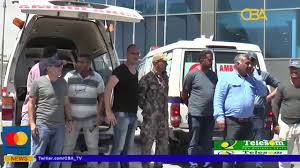 Two Turkish brothers were Engineers constructing a road near the ex-control Afgoye junction where the truck exploded killed 79 others.

Somalia has launched an investigation into the attack. Turkish embassy in Mogadishu is closely following the process according to Turkish news agencies.
Al Shabab was pushed out of basis in Mogadishu by the Somali army in collaboration with the African forces raising hopes of return to relative stability in a city plagued by decades if civil wars but militants have kept up guerrilla style attacks and continued to control large rural areas challenging the authority of the gov’t.
The group has carried out several attacks this year including one on a European convoy and another on a hotel in Kismayo in southern Somalia.
Somalia is attempting to rebuild itself after two decades of civil war and lawlessness triggered by the overthrow of President Siad Barre in 1991.
The fragile gov;t is being backed by the international community preventing it from becoming a haven for Al Qaeda style militant in the East African country.
Turkey has led an effort to help Somalia pouring some millions of aid into the country since 2011 most of it from private firms.
Turkey has also sought a greater diplomatic role in the region including the initiating to break a dialogue between Somaliland and Somalia.
One of the reasons Turkish involvement has been effective i it combines aid with national rebuilding whole Turkish agencies and NGO’s are focused on reducing the humanitarian crisis. Other state sponsored agencies have been building the infrastructure necessary for the recovery of the country.
This include building hospitals, airports and many roads in the capital Mogadishu.