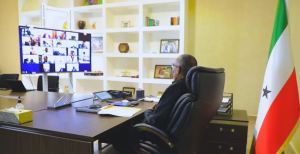 The state is reviewing the national land policy in the country.

This was revealed at the 81st council of cabinet meeting that was chaired by the President H.E. Musa Bihi Abdi on Thursday 21st October. The VP H.E. Abdirahman Abdillahi Ismael was present too.

In essence, a directive was issued for the completion of the Land Management Bill to be tabled to the Parliament.

There has been issue perennial hues and cries over land conflicts as regards pasture-lands and farms in every corner of the country.

The session brought forth four recommendations after extensively long deliberations that were tailored to address the issue.

At the same time, they discussed social media menace that is detrimental to social security; and also, the status of the latest Covid-19 pandemic to date.

The council of cabinet resolutions as concerns land issue were spelt out as follows:

Noteworthy is the fact that since the Presidents Rayaale and Silanyo administrations the issue persisted hence the new guidelines would be strict hence cautioned that people would be held liable if the infringements on the rules occur.

Meanwhile as concerns the social media menace, the session listened to a committee which was tasked on delving into its negative aspects as per social-security and/or cultural stability hence were given a 30-day ultimatum to come with executive ways and means of curbing them.

The health minister informed the cabinet in his brief that oxygen for patients are available full-time in all major hospitals.