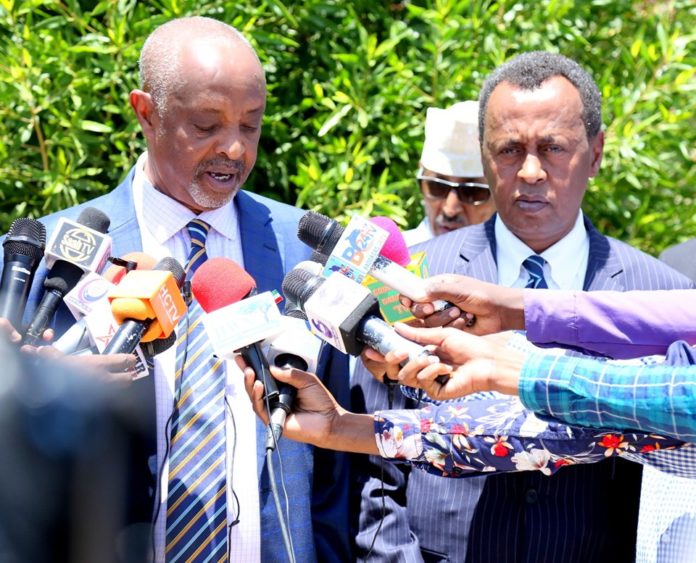 As it expects relation with East African countries to fledge

The government of Somaliland is expecting the government of Kenya to soon open its consular offices in Hargeisa. Similarly, the expectations of having Kenya Airways open the Hargeisa route is quite high.

The confirmations of the issues were made plain by the Interior Minister Hon. Mohammed Kahin, who also said they are resolute on fledging cooperations with EA commomon wealth countries of Kenya, Ugand and Tanzania, upon his return to the country after a weeklong official trip to Kenya.

The KULMIYE and UCID delegation that was led by the duo of Hon. Kahin who is the First Vice Chairman of Kulmiye and Feysal Ali Hussein who is UCID chairman precisely went to the African central hub of Nairobi in Kenya to meet partners to delve upon and into the issues surrounding the hiccups that has hit the holding of the upcoming general elections and, likewise, the uplifting of the bilateral relations between Somaliland and the International Communities.

Hon. Kahin told the media that the delegation met senior Kenyan government officials and they both agreed to having the Kenya consular offices opened in Hargeisa, the Kenyan Airways to ply the Hargeisa-Nairobi route and most importantly there was high expectations that the Kenyan government would acknowledge the Somaliland national passport as an official travel document.

On the domestic scene, the duo pointed out that the general elections is expected to be held as slated and that its preparations is in high gear.

They noted that the beleaguered party of WADANI is welcome to continue the inter-party talks to clear the hurdles in paving way for the elections to be held.

The UCID chair observed a wind of good omen to be blowing in favour of Somaliland’s aspirations.

To such, the UCID chair noted, “It is only as a united front that the people of Somaliland can reach their aspirations”.

They both were irked by the purported meeting of Buroans fronted by a local traditional leader.

They maintained that time for tribal meetings was long gone