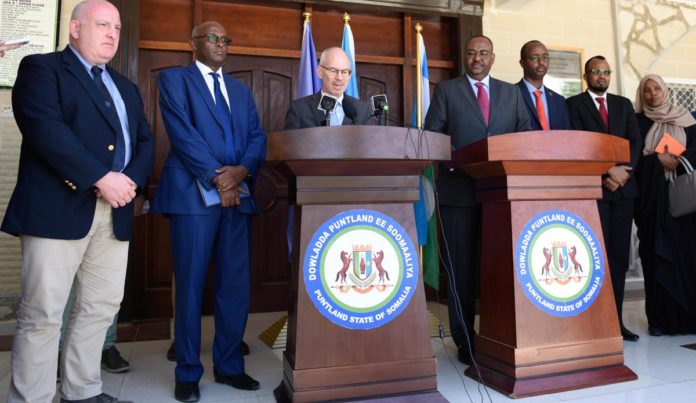 I am pleased to have visited Puntland and engaged in a very constructive meeting with President Said Abdullahi Mohamed Deni and his team. After spending my first two weeks in Mogadishu, where I have had excellent initial contact with the Federal Government of Somalia leadership, this is my first visit as Special Representative of the Secretary-General to a Federal Member State. We began with Puntland as it was the first Federal Member State to be founded. I will continue with visits to other Federal Member States in the coming weeks.

The UN family is widely engaged in a number of activities in Puntland, ranging from good offices to emergency humanitarian assistance to medium- and long-term development projects.

UN missions and agencies, funds and programmes have supported the efforts of Puntland authorities for many years in developing institutional capacity, strengthening the rule of law, improving livelihood sector development, facilitating political reconciliation and conflict resolution, and promoting security sector reform and human rights, among others. I am accompanied today by the Country Director of World Food Programme, Laurent Bukera and Head of Office of the UN Office for the Coordination of Humanitarian Affairs, Justin Brady, and we will continue to work as ‘One UN’ for the benefit of the Somali people.

We are looking forward to working closely with the people of Puntland and the federal member state administration in order to implement the UNSOM mandate and the programmes of the UN agencies more effectively, including efforts to support inclusive dialogue among the Federal Government of Somalia and the Federal Member States.

President Deni and I also discussed the longstanding dispute in the Sool and Sanag region and the sporadic fighting that has occurred in the vicinity of Tukaraq in recent months. This has heightened tensions in the area, and I urge the leaders of Puntland and Somaliland to pursue a peaceful resolution on this dispute.

I look forward to close collaboration with the Puntland authorities, during my tenure and enhancing the work of the UN in support of the Puntland people.