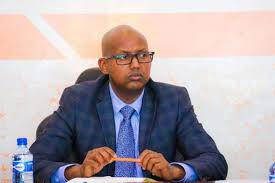 The political party believes that the ban of these two airlines would likely affect the country’s economy which which is coping with downturn impact on Covid-19.

The party once again has criticized the government for the ban of the two flights.

The political party said that the government did not provide clear reasons for the ban.

The Secretary General of the party has said that the flights ban is affecting the country’s economy.

He said: ” We are all aware that fly Dubai & Al Arabia still cannot operate in Somaliland. The government did not give the reasons for the suspension. This will affect the people of Somaliland.”

Khadar Husein reiterated that if the government does not act on this issue, it would pave the way for a monopoly market.

Meanwhile, the party’s secretary general has scathingly accused Hargeisa municipality for failing to live up to its duties, citing the badly damaged streets in the capital.