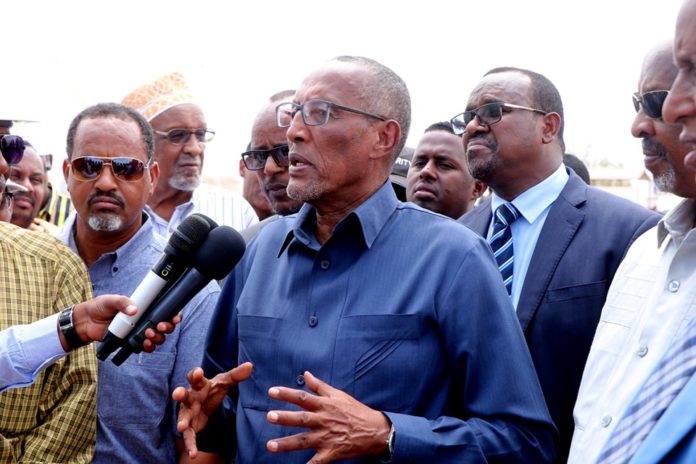 The president did not elaborate whether the UAE has come up with a new change of order converting their airbase into civilian airport. But some reports also indicate that the airport will be taken over by another international operator. The President also laid the stone for construction of major expansion of Berbera Fuel Storage Tanks which according to the concerned officers will facilitate re-export of refined fuel products into land-locked Ethiopian – a business presently entirely controlled by neighbouring Djibouti.

The port officers told reporters that Ethiopia is eyeing to divert some of its fuel imports from Djibouti to Berbera Port obviously as part of strategic redirection in this turbulent Region.

It is also widely believed that Somaliland and the United Arab Emirates have only signed a Memorandum of Understanding (MOU) regarding the Berbera airbase project but no binding agreement has been concluded. Nonetheless, the Emirates has almost completed construction of the airbase and announced that the base will be opened in June 2019.
On top of that, the airbase project also comprised construction of highway linking the port to the Ethiopian territories. But the Emirates has yet to commence construction of the highway (Berbera Corridor) and were obviously dragging feet of this portion of the project.
Whatever the case, only time will tell the final outcome of the presently secret deals in the making. But, the face of President Muse Bihi who is 40 years veteran warrior and shrewd politician depicted an unusually optimistic mood which has resonated positive energy across the entire Somaliland territories.
By: Hassan Andi Yousuf
Retired Banker & Geopolitical Analyst
Hargeisa, Somaliland