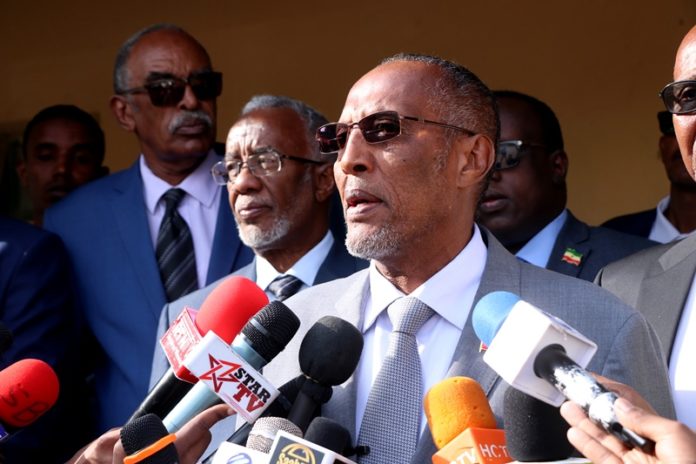 The Somaliland President Muse Bihi Abdi held an ad-hoc press conference with members of the media in Hargeisa, in which he made several key comments.

The President who, along with the minister of Education, visited one of Hargeisa’s secondary schools, where students were sitting for this years’ national examinations.
Speaking to media, President Muse Bihi Abdi stated ” that we need to focus on the development the nation is making, our economy is growing, our education system is growing and our capabilities as a government and as a nation are growing”
When asked about the situation in Eastern Sanaag and the continued incursions by the Puntland administration, the President stated ” the main issues in that area is one of community. You have two cousins, one works for Somaliland and the other for Puntland. The Somalilanders in that part of the country are true patriots, but, we need to resolve the issue of the settlements and grievances in a peaceful manner, and we are doing all we can to do that”
Responding to the question of the alleged spate of political detentions, President Muse Bihi, remarked that ” there is no question of political detentions, but, if you break the law, whether as a politician, journalist, physician, entrepreneur, or an ordinary civilian, then you must answer to the laws of the country”.
The President also commented on the matter of prospective meetings of two communities in Togdher region. President Muse Bihi stated that ” Somaliland’s communities have every right to meet and discuss issues pertaining to their relationship and the state of the nation. I am certain all Somaliland communities meet to discuss peace and the positive steps we need to take”.
In his impromptu press conference, President Muse Bihi declared ” we need to resolve the issues in El-Afwien, even though the administration has invested time, material and extensive effort, the government needs the support of the community elders to find a resolution to the situation “.
Finally, when the President was asked about his previous comments to the late President Mohamed Ibrahim Egal, concerning the composition of the core members of that administration, that they all came from the same community, President Muse Bihi replied “the circumstances between then and know are completely different..at that time Somaliland was in the midst of an armed internal conflict, today the nation is at peace and my administration is inclusive and all the Somaliland communities are well represented”.
The ad-hoc press conference by the Somaliland President Muse Bihi Abdi has already generated extensive analysis, but one matter that was not mentioned was the state of preparedness for the prospective parliament and local council elections scheduled for less than six months time.