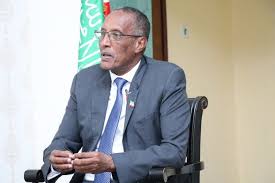 The Somaliland President who is on tour to the eastern region of Somaliland has urged the regional judiciary to speed up the decision of the recent rape and murder in Burao. Ugbaad Ali who was a  Single mother was raped and murdered in Burao last week.

Muse Bihi Abdi, the President of Somaliland who arrived in Togdheer region which is part of his working tour to the eastern region of the country has for the first time spoken the ugly incident of a girl who was raped and murdered in Burao last week.

The President directed the regional judiciary to expedite the verdict of the recent rape and murder in the region. The President who described the incident as ‘Nasty’ has promised that his government will immediately implement the court verdict.

‘May Allah have mercy on Ugbaad Ali. I have directed the regional judiciary to expedite the court verdict.  We are hereby warning everyone to refrain from intervening in this case which is a nasty one, and I shall execute this case as soon as the court submits its judgment to me. I promise to have it executed very quickly.’

Protests were staged by women in the major cities of the region demanding justice for the victim. The Togdheer police forces, which dispersed the protesters, assured the angry crowd that Ugbad would get justice.

Ugbad Ali Abdilahi was a young single mother with 3 kids. She was buried last week in Burao while the accused remain in police custody. Regional security agencies are investigating the incident and its cause.