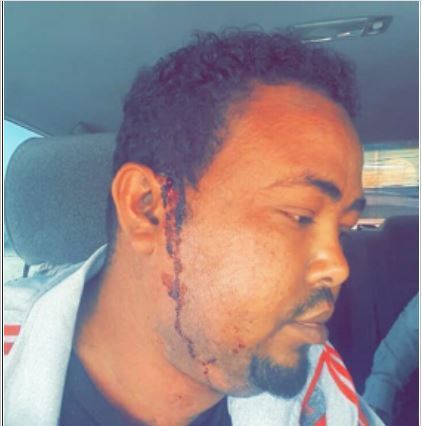 Khadar Macalin Deeq, a reporter from Bulsho TV based in Hargeisa was physically assaulted by several police officers whilst going about his work. The assault occurred on Sunday, and the reporter his currently in hospital suffering from wounds to his head, back and hips. Although, his condition is improving daily, as these pictures show, reporter Khadar Macallin Deeq suffered significant injuries and was taken to casualty department of Gargaar Hospital.

The injuries to reporter Khadar Macallin Deeq were allegedly caused by an officer of the Traffic Police who apparently neglected to heed his duties to “serve and protect”. The Somaliland Police Force has been accused of being heavy handed in their dealings with both the members of the public and journalist.

This is not the first time that a member of the Somaliland media has been physically assaulted by police officers. Despite the continued training and education provided to Somaliland Police Officers by various organisations, both public and private, such as the UNDP and Axiom International, it would seem that there are still rogue officers who are neither suited to law enforcement work nor capable of following basic policing guidelines.

The Somaliland Police Force have yet to comment on this situation and the matter is awaiting adjudication.