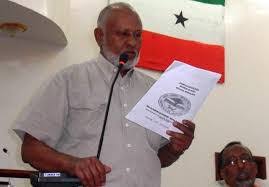 Somaliland’s national electoral commission (NEC) has briefed the house of elders-Guurti that the parliament and local council polls will be put off due to technical and logistical problems. The NEC members held closed door meeting with the house of elders speaker, Mr. Sulieman Mohamud Adan on Saturday morning. The house speaker has announced that elections won’t be possible to transpire in Somaliland. The national political parties locked horns and caused a disagreement among the parties which took differing stances on the best way to hold elections in Somaliland. This postponement for the third time running will disappoint the international community and this is a sign that Somaliland democracy has taken a step in the wrong direction. Mr. Sulieman has further asserted that polls won’t happen as a date was fixed. The blame for being constraints to the possibility of holding the parliament and local council polls were put on the shoulders of the political parties, the legislative bodies and the current government led by president Bihi.