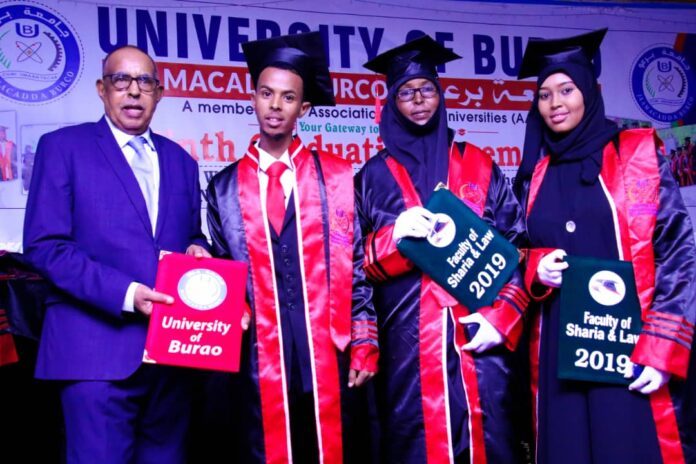 A 49-year-old mother of five has graduated from a university in Somaliland alongside her youngest daughter and her son-in-law, in an unusual family celebration of educational ambition and commitment.

Sabaad Abdullahi Madar and her daughter Hafsa Abdullahi Husein, 21, graduated from Burao University’s with degrees in law on 15 September, while Hafsa’s husband, Mohamed Rooble Hade, 26, graduated at the same time in information technology.

Sabaad, who grew up in a pastoralist community in a rural village in Duruqsi, on the Ethiopian border, told Radio Ergo that education has always been her measure of success in life.

“I always wanted to be a well-educated mother in order to set an example for my children and give them a good upbringing. To me, there is no specific age for an individual to seek knowledge,” she said.

She and her husband, who has been sick for some time, moved with the children to Burao when Hafsa was four years old. She enrolled herself and all the children in an Islamic school to begin their education.

Hafsa, meanwhile, got married last year while still at university and defended her thesis just a week after having her first baby.

Marriage and motherhood have not been a barrier to her continuing education.

“I used to think that if I married young, I wouldn’t be able to continue my studies, but after doing some research I found out that there were in fact several mothers who had a family life and were still studying. This made me tell myself that if they can, I could too,” Hafsa told Radio Ergo.

Her husband Mohamed supported her to achieve her educational ambitions.

“Somali men are said to be against educating their wives or allowing them to take up jobs. But my husband has been a support system,” Hafsa said.

“He encouraged me even when sometimes I felt like quitting.”

As for Mohamed, he told Radio Ergo that he had always wanted to marry a woman who would match him in terms of education.  He used to dream of studying together.

“I used to tell her when we were dating that I would like her to study even after we were married,” Mohamed said.

“We used to talk about how I wanted us to leave the house together to go to school and then come home together. Of course, I have friends of both gender who ask me why I allowed my wife to go to school, but I just tell them I want her to get educated as I am also studying.”

Mohamed’s parents, especially his businessman father, have been supportive too and have helped him financially to pay for his education and provide for his young family.