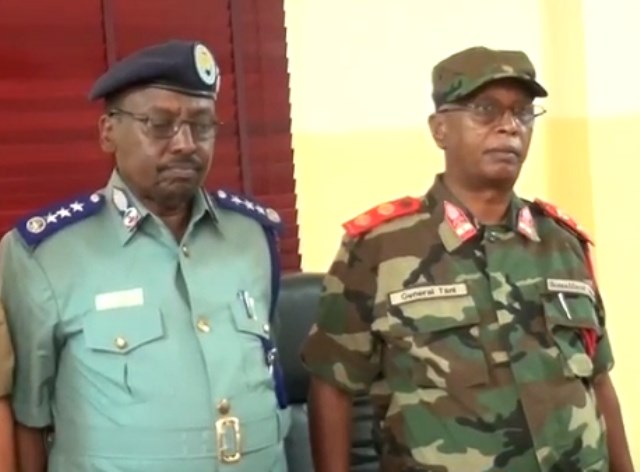 Speaking to the gathered press, the Generals gave a briefing over the tragic events of the last few days which led to the death of two Somaliland officers from Police and Custodial Corps. The two offers were slain in an ambush by unknown assailants.

The two generals outlined the nature of the Emergency Law, which according to them will leave the administrations of the three towns in their hands of the Military, Police and other branches of the security services.

The Generals appealed for the residents of the three towns and all Somalilanders to work with the security services to maintain law and order and strengthen the peace in the country.

The Generals also appealed for the Somaliland media to be more accurate in their reports and to inflame the situations with unconfirmed news.

However, it is worth noting that despite the appeal from the two commanders, it is precisely because of the lack of disclosure from the administration that leads to speculations and supposition on behalf of the media. If the administration and the armed forces were more forthcoming by issuing clarification and press briefings it would be easier for the media to be more accurate in their reports.

The last few years has seen continues conflict in that part of Somaliland between neighboring communities which has severely tested the administration and armed forces to the limit. Sadly, before the tragic murder of the two officers, thanks in part to extensive negotiations led by the government, community elders and activist, the situation appeared to be taken a turn for the better.

Unfortunately, the recent tragic events have now spread the tentacles of the conflict across Somaliland.