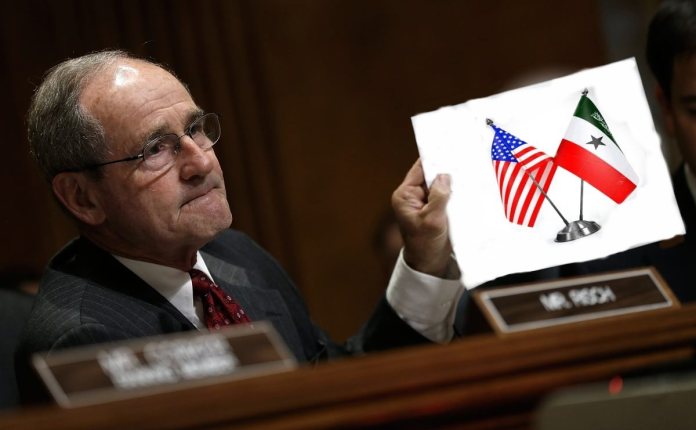 First let me ask for your indulgence for addressing this letter to you without the ceremony of Protocol, but I believe it is permitted in the face of great national necessity to trespass on the finer etiquettes of diplomacy and the subject of my letter does, at least in my eyes, qualify as such. I am writing for your information and I beseech you to glance through it, a memorandum on the origin of Somaliland and its present dilemma. Diplomats refer to Somaliland in a derogatory sense as a self-declared Republic. I see no shame in that epithet but on the contrary I take pride in it, remembering that the Great Republic which you have the honor to represent started its glorious history as a self-declared Republic.

From that day the word Republic has assumed an honorable distinction a glory which has never before been associated with it in an international congregation of kings, Dukes, Pretenders, Czars and Kaisers. The writing memorandum gives you in nutshell the history and the hope of our country and our people. It also gives you a brief assessment of the problem of Somalia itself and a glimpse of the pivotal role which the Republic of Somaliland and its people can play in solving the intractable problems of Somalia.

Our country, Somaliland, is not an entity which was born after the disintegration of the Siad Barre dictatorship. In pre-historic times it was known as the land of Punt. Many, including recently Ethiopia, lay claim to that legendary name. However, two undeniably basic facts prove beyond doubt that the land of PUNT was what is now know as Somaliland. First the land of Punt was famed for its production of Frankincense and that is why The Pharaohs believed that the Land of Punt was the home of the spirits of their God-Kings. There is no other place in the Horn of Africa where that tree grows except in the northern most region of Somaliland. Secondly, all the ruined cities of the people of Punt are located here in Somaliland and an English army officer who participated in the campaign against Sayid Mohamed Abdulla Hassan has written a small book which he called the ruined cities of Somaliland. These two facts conclusively prove that in ancient pre-historic times a country existed in Somaliland which had its own identity and its own geographical contours.

In recent History Somaliland was part of the Uthman Empire under the Khadif of Egypt. It was then know as “ Arda Somal “ – The Land of the Somalis or Somaliland. In 1884, the British have taken over from the Turko-Egyption rule and established over this land the British Somaliland Protectorate. A country which on the 26th of June 1960 had taken its independence from Britain as the Republic of Somaliland.

These brief chapters are designed to prove beyond doubt, that the Republic of Somaliland was never an integral part of the former Italian colony, and subsequently The United Nations trust territory of Somalia. People who are not aware of these facts are invariably left with the mistaken impression that Somaliland is a renegade region of Somalia. On the 1st of July 1960 this country “ Somaliland “ has voluntarily and against the wishes of the main body of the Political leadership in Somaliland , had united with Somalia in pursuit of the ideal of creating a Greater Somaliland, consisting of the five segments into which the scramble for Africa had divided a homogenous nation. That ideal has atrophied under the Dictatorship of Siad Barre and because of the unrelenting opposition of all the International Community. There was a time when Great Britain under Tory Government have briefly accepted the idea and decided to relinquish the Somali inhabited districts of Kenya to Somalia. But at the request of Emperor Haile Selassie, President Kennedy, have prevailed upon his friend Mr. Harold Macmillan, the then Prime Minster of Britain, to ditch the Somali cause. From that time all the International community stood together solidly against the unification of the Somali People.

Our fathers and grandfathers who have lived through the magnificent years of the fifties will never forget that great wind of change which blew across the continent and that great continental levee – en – masse which for the first time in history produced a black, purposeful solidarity throughout the whole continent, and for a brief period gave to the people of all the African Countries a common initiative, a common purpose and a spirit of a nationhood. The independence which should have fostered that magnificent spirit and should have built nations on the Euphoria of the period and on the ashes of tribalism, have failed miserably. No attempt was made to pioneer a new form of governance. Instead a band of black men have merely taken over from the retiring former colonial Civil Servants.

The system of colonial rule whether legal or administrative was allowed to function as severely and obnoxiously as it did in the past with the only different that the enforcers of the rule were now black men. In few short years the petty dictators who have taken over from the colonial governments have dissipated the euphoria and dismantled the levee – en – masse which should have carried the continent to new heights of human endeavor. The men that should have helped to tame the dictators like the flamboyant men of Camelot in America who have fallen so very short of their eloquent rhetoric, the mediocre Harold Wilson who coined “ the diminished Britain” and burrowing deeply into his Mediocrity lead the people of Britain into despair and self pity. In France, de Gaulle was gone and the search for a successor is still going on. All these men in the pursuit of influence and allies for the cold war have abetted, encouraged and wooed the Petty Dictators who were ruining Africa. Nation building all over the continent has come to an abrupt end with independence. The people of Africa were forced in silent rage to go back to the only social and political organization they knew – tribalism. The unification of the Somali people which was attempted in 1960 was part of that nation building and like the rest it died an untimely death.

Somaliland is now the only country in the Horn of Africa where an effective program of nation building is being vigorously pursued. We have now conquered the anarchy bequeathed to us by the disintegration of the Dictator ship. Peaceful co-existence between all over clans have been painfully nurtured and is now fully established. We carefully chosen new government and we elected a new parliament would lead this nations and this country to a renewed social and economic leap. We hope that within the next future we can redesign the pastoral nomadic existence of the nation on the basis of a scientific ecological engineering. We “ Somalilanders “ intend to survey the whole country for underground and surface waters and then zone our pastoral land into seasonal zones.

There are men in Mogadishu, Bosaso and in other cities of former Somalia who having failed their people and ruined their country and in the process shed rivers of innocent blood, are now enviously trying to compromise and hamper our progress and our achievements. These men have no say in our affairs, just like they have had no say in our decisions in 1960. In their utter poverty of political ideas and innovations, they are clinging to one slogan which they repeat like a Parrot unaware of its emptiness and insignificance. That slogan is : “ SOMALI UNITY IS SACRED “. They have never stopped to ask themselves whether that sacred unity includes the Republic of Djibouti, the 5th Region of Ethiopia, and the NFD of Kenya. There is nothing sacred about something that does to exist and we reject them and their childish slogan and their evil blood-stained leadership. We apply ourselves to address directly the whole international community and specially our brother in Africa to take notice of our existence, to recognize our sovereignty and to help us help the rest of Somalia to rid themselves of the painful burden of the war lords and to rebuild their country and their lives, as we did, from the grass roots of the nation.

The political map of the Horn of Africa with the rise of Eritrea, Southern Sudan and Somaliland has also change the “ New World Order” favors the downfall of African Dictators. That are being swept by the current wind of change in Africa. The break-up of cumbersome states in Europe is also welcome. The recognition of the emerging states is the order of the day. Though recognition is essentially a political decision the identical situation of the emergent states of both continents neither be denied nor overlooked.

We have to have the will, the political will and collective will. We have a right to get self-determination and get recognition from the world.

We should therefore be considered for immediate recognition and development in order to help us cope with tremendous problems we face.