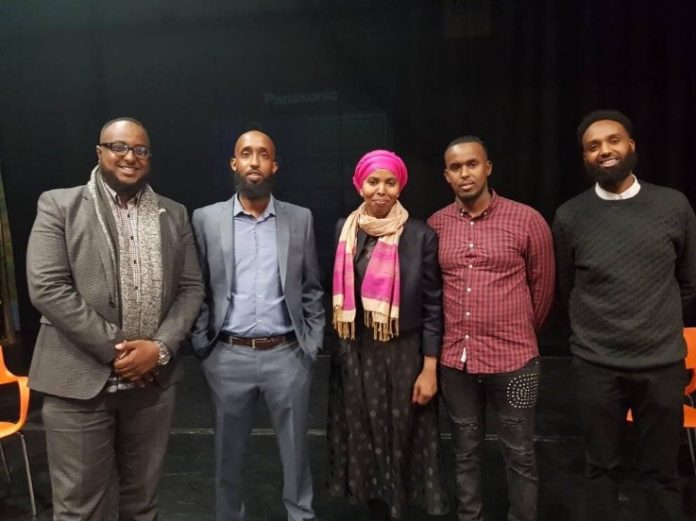 In 2008, Somaliland’s football had no real organised structure, and Somalilander players had no proper pitches on which to play.

Having coached Somalilander children since the age of 16, Ilyas Mohamed – now Director of the Somaliland FA – saw an opportunity to give something back to Somaliland. So he took the first steps to change the state of football in his home country, to create a football culture, and unite the younger generation around the game.

Together with Guiled Aden (Director of Football Operations), Ilyas began raising awareness, raising money, and organising a league of promising young Somalilander players in the UK. By 2013, British-based Somalilanders were watching their national team take to the field at Barnet FC, and by the time Somaliland competed in the 2016 CONIFA World Football Cup, they were the proud ambassadors of their country.

It is this pride and sense of national unity that drew so many Somalilanders to Haringey Sixth Form College on Friday 1st March for the official community launch of the 2020 CONIFA World Football Cup, which will open next year in the national capital of Somaliland – Hargeisa. It is also reflected in the tournament logo (officially unveiled for the first time), featuring the prehistoric cave paintings of Laas Geel, a unifying icon of Somaliland’s history.

Although there are still some obstacles to overcome, the Somaliland FA is working closely with the government – Ilyas reserved particular praise for the Minister of Sport – and with CONIFA to deliver a successful tournament. It’s a testament to Ilyas and Guiled’s organisation, and the efforts of team manager Omar Abdillahi, that the country is ready to host their first major tournament.

To Ilyas, the tournament is “a chance to do something for [my] country and make a difference in the lives of Somalilanders.” Speaking to the audience, he said “I want you to lead the way.”

Paul Watson, CONIFA’s Director of Member Development, was on hand to explain the role of CONIFA to the audience. He expressed his hope that, in hosting the WFC, Somaliland can “not just host a great tournament, but make a positive impact on people that can continue for generations.”

But the CONIFA World Football Cup’s ethos is perhaps even better summed up by Ilyas’ assertion that he was doing this all “for the love of the game.”

To find out more about the Somaliland fundraising appeal ahead of the CONIFA World Football Cup 2020, please go here. https://www.gofundme.com/