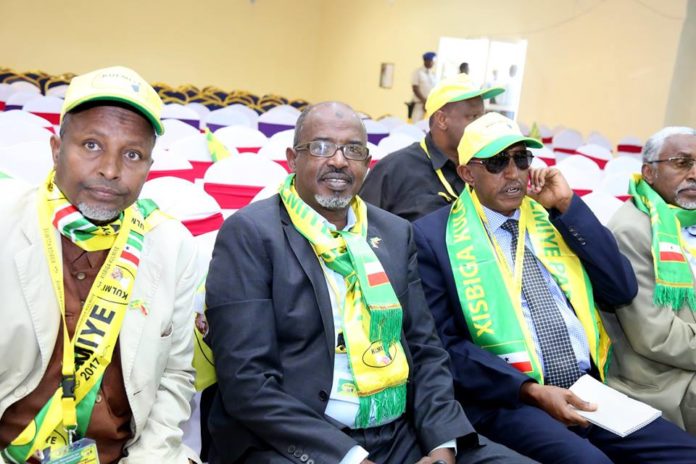 BORAMA–The ruling party’s central council committee met in Borama and elected new members who will fill seats vacated by members who expelled from the party.

The names of the members who were either expelled or deceased were read.

The president, Musa Bihi Abdi as the chairperson of the party presided over the meeting.

202 members of the committee voted in favor of approving 40 new members who will fill seats vacated by previous members who either tendered resignation or were expelled from the central council committee.

190 members of the central council committee also passed the vote of the expulsion of Prof. Abdi Ali Jama, Mr. Abdilahi Geeljire, Mr. Suleiman, and Mr. Osman who were recently expelled for ethical reasons after they were alleged that they breached the party discipline.

18 members of committee rejected to be expelled while 12 abstained.

The list of the new members who would join the central council committee were also read.

At the same time, the party elected new leader for the central council committee today.

Previously the post was occupied by Mr. Jama Shabel who opposed the party norms.

265 members were in attendance.

He got 257 votes while another candidate who was running for the post got 13 votes.