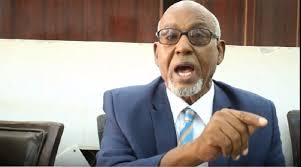 The Education and Science ministry on Saturday,has announced that it has put on hold on granting operational licenses to private schools and universities. The Education minister, Mr. Osman Adan Jama, speaking to local media, has reiterated that the incumbent president is giving priority to the public education in Somaliland. The minister has said that the public education sector has made progress after the incumbent president spearheading the distribution of free text books to local public schools.

The minister has asserted that the gov has totally stopped the announcement of top ten students of the would be released national exams. He also announced that the education ministry has put on hold the establishment of new private schools as well as private universities in Somaliland. Mr. Osman has said that these measures are part and parcel of improving the quality of public education in the country.

The Head of State has recently announced that his administration will strive towards the amelioration of public education system in the country which has been lagging behind its counterpart ever since the inception of Somaliland republic. He also pledged to put a zero tolerance policy towards the commercialization of Somaliland education system which got into the hands of profit oriented individuals in the country. High class communities send their kids to private schools whilst poor families send their children to public schools.