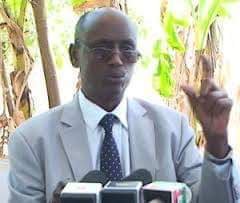 A controversial figure who was recently opposed by the opposition political parties in Somaliland was named  as Somaliland’s National Election Commission Chief on Saturday as the country gears up to hold free and fair elections in 2020 despite several delays.

Mr. Abdirashid Riyo Raac has become the new boss for the newly sworn in Electoral Commission amidst political squabbles that have marred the selection process among the political parties.
Mr. Mustafe Dahir has also been chosen as the deputy NEC boss.
The new NEC members held its first meeting following the approval and taking the oath of office a couple of days ago.
Wadani party suspended its member for the election commission and has not showed up during the parliament approval and the swearing in ceremony at the presidency.
The party has cried foul and put questions over the neutrality of the NEC chief who is accused of being a Kulmiye ruling party.
The international community that support Somaliland democratization process also issued a statement expressing their concern over the delay of polls and the term extension to Somaliland’s bicameral parliament.