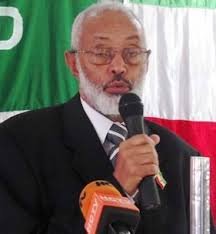 HARGEISA–The former minister in charge of treasury has spoken wide range of issues that have a far reaching consequence to the republic of Somaliland. Hon. Mohamed Hashi Elmi, the former minister during Silanyo’s presidency has advised on the leadership of president Musa Bihi must follow a zero tolerance policy to combat corruption, embezzlement, bribery and kicks backs in his government. He also urged the incumbent president to take stern action against those accused of indulging in corrupt activities in the state.  In an exclusive interview to Geeska Afrika, a local newspaper based in Hargeisa told on Wednesday that Somalilaland had four presidents whereby two died and two others are alive and can olny speak about the leadership of those alive. The ex-minister has leveled accusation to former president Riyale for his lack of commitment to protect and preserve public asset. He narrated that there was a time that the public servants including men and women in uniform did not have their wages paid for four months. The former minister stated that former president moved to France and bought houses there so that his family and children lived there.

The former minister revealed that the ration for the armed forces, the food for jails and hospitals were not also allocated. Once Silanyo won the presidency that the former minister has called on him to bring all former corrupt officials into a fair trail.  Mr. Hashi stated that Silanyo said that all those assets misappropriated should be forgotten which the minister has said that he spoke against him. He accused Mr. Silanyo of making a government that was overstaffed which was not the right thing to do. He blamed the former Head of State for allowing the immunity of corrupt officials not be persecuted as far as combating corruption and graft in government is concerned.

Mr. Hashi giving apiece of advise the incumbent Somaliland president said that everyone is going to die sooner or later and in the hereafter that all public officials will be held accountable for the misappropriation of public assets. He urged the incumbent to take stern action of those implicated of graft in his government.

He called on amendments to what is allowed for the president and vice president to earn from the sate after retiring from public office and the upper and lower house of parliament have increased their wages twice while an MP earns 3000 US dollars which is beyond the capacity of this young nation which has a meager revenues mainly generated from taxes collected from citizens. He said that this was a sheer stupidity of the former Somaliland president Silanyo who spearheaded this notion. The former minister also talked about tribalism which is also prevalent in the country.

He urged to refrain from all tribal sentiments which is a destruction and hampers the country’s progress towards a nation. Once asked about the talks between Somaliland and Somalia said that Somalia does not acknowledge the ethnic cleansing against citizens from Somaliland where Gen. Morgan, labeled as the butcher of Hargeisa was the ring leader and the mastermind of the massacre where thousands were killed in conjunction with Ali Samatar, who was the vice president and minister for defense during the military regime led by Siad Bare.