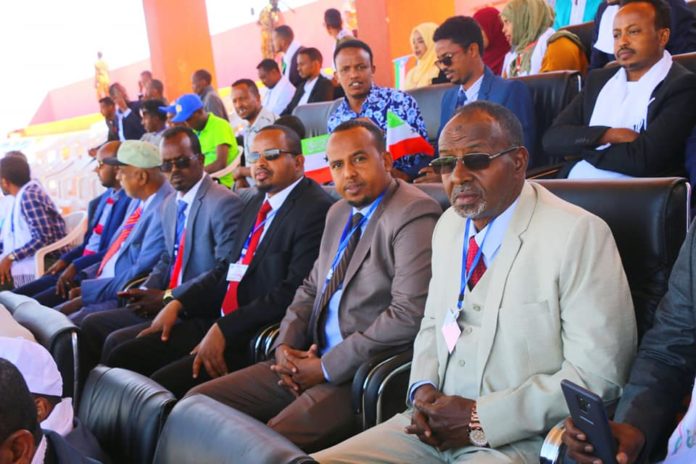 A Somaliland delegation led by the Public Works Minister Hon. Abdirashid Haji Duale Qambi left for the Ethiopian City of Jigjiga in the Ethiopian Somali State for the national celebration of the 8th Ethiopian Cities day.

The SL delegation said that the tour would enable them to palpitate on the workings of major cities as they pursue development hence gain more experiences.

They thanked the Somali state of Ethiopia for having invited Somaliland.

This is the 8th time Ethiopia holds such an event which coaxes them to have apt inter-city competitions as far as developmental progresses are concerned.

It kicked of yesterday and is expected to close by the 21st of February 2016.

It attracted 167 representations from Ethiopian towns and cities, neighbouring states and 10 UN Agencies

The Premier made the remark today in connection with the 8th Ethiopian cities day which will be celebrated in Jigjiga, the capital of Somali regional state, tomorrow.

He said dedication and tangible activities are required from dwellers, developers and all Ethiopians to make “our cities centers of civilization.”

This year’s event is expected to be a good occasion to celebrate the color and beauty of Ethiopianism and prove that the Medemer (togetherness) philosophy is the foundation for the peace and prosperity of cities, he said.

Now is the time to work hard to make our cities centers of unity, the Prime Minister said, adding cities need to prepare themselves to provide better services to dwellers and address unemployment.

The Prime Minister said his government will do all it can to respond to the rational questions of the public for infrastructures, such as residential units, water, electricity, transport, road, and health facilities, among others.

While kicking off the event President Sahle-Work Zewde on the occasion said the event would help to mobilize urban dwellers, create national consensus, encourage healthy competition between cities, share experience and create sense of ownership among dwellers.

Strong partnership between cities is vital to bring comprehensive development in urban areas, the President said, further calling all stakeholders to fulfill their responsibilities to improve service delivery in cities of Ethiopia.

Deputy Chief Administrator of Somali regional state, Mustefa Mohammed, for his part said works are underway to ensure the benefit of the residents by alleviating problems of good governance and malpractices.

This year’s celebration of cities day will continue until February 21, 2019 under the theme “Medemer for the Prosperity of Ethiopian Cities!”