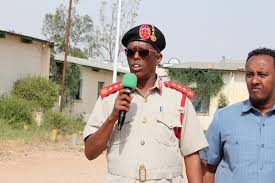 Unknown armed assailants ambushed a government vehicle on last Tuesday which was traveling in between Dilla and Borama townships.

They opened fire on the car- firing many shots before they escaped the scene.

The operation commander from the defense forces held meeting with security committee and traditional elders from the province.

Mr. Abdirisak told that the security of the province will be out of control unless actions will taken to ensure the stability.

He said that his mission was to conduct army inspections and to asses the real situation on the ground.

He revealed that a horrible incident transpired in the province whereby assailants fired multiple shots on government car.

He hoped that the discussions he held with the security personal and the elders from the region will avert such incidents to occur.

He insisted on taking the necessary measures to ensure that security is under control.

There were recent reports that claimed that rebel groups were formed in the province which took arms against the current government.